The official TrailDamage.com camera finally kicked the bucket after being filled with dirt and sand for years. We asked our followers for donations and they responded right away, funding a new camera for the group. We did what we could to repay the favor, sponsoring them with membership. Joe joined the group first, and we took some great photos with the new camera. We met in Bailey for a change of pace and then headed off to Geneva Creek.

It was the big weekend for changing aspens in Colorado, and the trees had leaves that changed from green to yellow. It's a narrow window of time as the wind soon blows the yellow leaves to the ground. That meant that everyone left Denver and headed for the hills, and Guanella Pass is a popular spot to take pictures of the leaves. We had to do a bit of Guanella Pass to get to Geneva Creek, and it was a parade of cars and people wandering all over the place. Still, everyone was smiling and it was a happy experience.

When we got to our little patch of dirt around a few trees where we used to air up and down at the trailhead we were surprised to find it paved with parking spaces, a kiosk, and a sign for Duck Creek. It was really weird but pretty nice. It promised to be a chilly day while we got ready for trails.

People were waking up from a cold night of camping, with snow on the sides of their tents. Not many campers looked like they were prepared for the night, wearing thin pajamas and pained expressions. We hoped they got their fires started soon to warm up.

As we climbed, there was more snow at the sides of the trail. It kept getting colder, too. We crossed our fingers and hoped we wouldn't run into anyone on their way down as passing is so difficult. We did find someone, but it was right at one of the few wide spots so it worked out just fine.

We climbed up without incident and stopped at the big cabin ruins at the "Y" intersection. It was definitely cold and windy, and the boys had a snowball fight with the small amount of snow in spots. We looked up at the basin between the mountains and decided to head up there first. It looked very chilly.

The climb up to the top had some snow on it but it wasn't slick yet. When we got to the top it was very windy and very cold. But it was the first exposure to the 2016-2017 winter and we enjoyed it in a weird way. Everyone took lots of pictures, and Matt's Exchange Student hiked up the side of Revenue Mountain for a ways to check out the views and take a picture of us from high above. Even though the weather was wintery, we stayed for a while before heading down.

We could see Santa Fe Peak was in the middle of a snow storm, but we headed over there anyway. Luckily, it wasn't a blizzard when we got there. The scenery was gorgeous, and we took lots of pictures as we explored the old mining site. It was windy, though, and we decided to have lunch there in our vehicles. It takes a lot to drive us to that.

We stayed for a while but then headed back down. We saw other vehicles on their way up the big hill, but we got lucky again and passed them in wide spots. Many of the campers we saw earlier were gone when we passed that area again, hopefully to go warm up in town.

The trail was fabulous and scenic, as always, and we had a great time. There was still a lot of daylight left, though, so we headed over to Slaughterhouse Gulch. 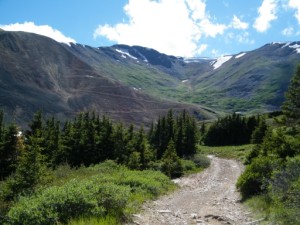 Led by Monica I.
We finished Slaughterhouse Gulch in record time, so we had plans to continue exploring. We had hoped to find a trail that circled Derringer Peak, but when we went around to the trailhead it turned out to be private property. We wandered around a little bit, but all of our…
Join Us!
If you aren’t a Member or Subscriber, you can’t see all of the content on this site. Get membership information to see why this site is best when you join and log in