This trail had been on our to-do list for years, but we just never got around to running it. We finally found the time, and we would finish up our day with it. We had hoped to also run Callahan Gulch just south of the Geneva Creek trailhead, but found out it was now a hiking trail and no longer accessible to vehicles.

The trailhead was easy enough to find, and we started down the wide and easy trail. It was flat and mellow as we passed campground after campground. It was really busy. We waved at everyone and just kept driving.

We were approaching yet another campsite when two trucks bounced and threw rocks everywhere so they could get ahead of our group. Naturally, they proceeded to travel quite a bit slower than we were. They floored it through the flat spots, kicking up dirt.

Then we watched as one truck blocked the trail while the other made numerous attempts to drive up an obviously illegal cut into the side of the hill. He had to try a few times, but then he made it up. He turned around and came back down, all while his friend blocked the trail so we couldn't pass. We couldn't believe what we were watching.

Luckily, when we got to the intersection, they went downhill while we continued uphill. We talked about them off and on throughout the rest of the day, wondering if they were driving in a mud bog off trail somewhere.

The rest of the trail was perfect. The hill climb after the intersection was a lot of fun. A lot of us had GPS units with us, and we all noted a right turn off of the trail that simply didn't exist. It is also shown on USGS maps, but it doesn't look like it's something that has existed for many, many years, if at all. It was odd.

We got up to the cabin and went to explore the mountain climb first. We passed some hunters and kept going up the hill. Everything was fine until the last switchback, when Monica found herself spinning in icy snow. She had to renegotiate her line and give it some momentum, and then she got through. Everyone else used momentum and got through just fine.

The view from the top was amazing. It definitely made the long trip worth it. We hung out for quite awhile before heading back down.

After the intersection, we took off to see the mines. The trail on the way there was fun, and the creek crossing wasn't very deep. We all looked at the mining relics and took lots of pictures. Everyone was especially interested in the old truck sitting up there.

The sun was behind the mountains at our backs, so we were in full shade now. We headed down, and aired up at the picnic area near the trailhead. It was a great day, and Geneva Creek was a really nice trail we'd do again. We finished the night with Guanella Pass. 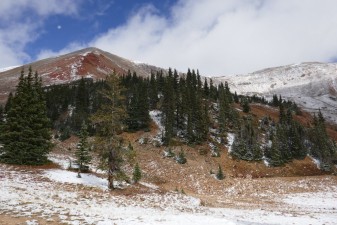