It's called Flume Creek so we were expecting to follow a creek. We should have looked a little longer at the map, first. The trail actually climbs up and down a ridge in the trees only to end at Flume Creek, so it definitely wasn't what we were expecting. Still, we were glad to be there.

The trail was largely in the trees, but we could catch a glimpse of the reservoir every once in awhile, through the trees. We soon caught up with a guy in a Jeep who we had seen off and on throughout the day, but we left him to his privacy and hung back.

When we got to the creek we pulled over and got out. We knew that the trail didn't continue for much longer and we didn't want to trap the other Jeep at the end by following him down there. We decided to wait until he came out.

The creek wasn't big, but the campsite next to the creek would be nice. Jeffrey was looking for places in the area for camping, so he made a note of it.

The other guy in the Jeep came back out and said that there wasn't much to see down to the end. Of course, we had to see for ourselves so we headed down after he left. He was right. The trail dead-ended in a bizarre way, just ending at some trees. A trail usually went somewhere at some point, but this trail just seemed to end for no reason. We had to back up a bit in order to turn around, but we all eventually got back out. Next time, we'll stop at the creek.

There was a rough trail that continued up and away from the switchback at the creek, but it just went to a small campsite. With that, we turned around to go back up and out.

Jeffrey left us after we finished the trail. We still had time to go check out the trails near Clear Creek Reservoir, so the rest of us headed a bit farther south. 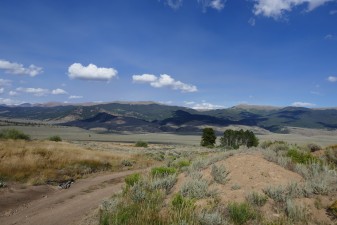 Led by Monica I.
After doing Lost Canyon, it made sense to do Flume Creek even though it was getting a bit late in the day.  We chatted about it for a bit at the trailhead and decided to head in.  By the end of the trail, we were going to do our best…
Join Us!
If you aren’t a Member or Subscriber, you can’t see all of the content on this site. Get membership information to see why this site is best when you join and log in