After doing Lost Canyon, it made sense to do Flume Creek even though it was getting a bit late in the day.  We chatted about it for a bit at the trailhead and decided to head in.  By the end of the trail, we were going to do our best to remember the best way to do Flume Creek.

Lost Canyon is a pretty amazing trail, and even though Flume Creek is right next to it it's not nearly as amazing.  You get a good view of the surrounding area here and there, but the best views are at the trailhead.  Still, it's a decent climb through aspen trees.

There is a hill descent that ends at the creek, though at that point it's just standing water.  This is where you need to turn around, and where we'll be turning around from now on.  Instead, we went out to where the trail ended.  It just ends with thick trees on three sides and nowhere to turn around.  We all had to back out a little distance to find a spot to turn around.  It was a bit stupid, and we were laughing about it as we went back to the creek.

The trail went uphill to a turn so we thought we'd see where that went even though it wasn't on the GPS.  It only went a few yards before that even ended in the trees with little room to turn around.  Again, a stupid spur that had us laughing.

So, we basically turned around and hoped we'd remember not to do those spurs next time.  On the way out, we remembered the fun spur that linked back to Lost Canyon so Niko ran up that to scope things out.  It was a blast!  It's definitely overgrown and eroded in spots, but it's a fun hill climb.  He waited up on Lost Canyon for the others, but no one else came up so he headed back down the fun hill.  Then he found the others at a switchback farther down.

The trick to doing Flume Creek, in our opinion, is to do the trail only to the fun hill climb, do the climb, and then head down Lost Canyon.  The rest of the trail doesn't make much sense.  But, any trail is better than no trail at all so we'd do it again when we were in the area next.

We aired up on the side of the highway and then headed into Buena Vista for an awesome dinner.  It was a great day! 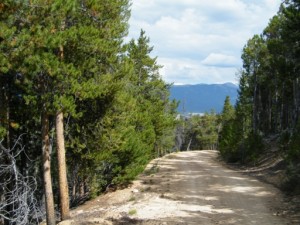 Led by Monica I.
When we ran Lost Canyon the first time we ran out of time to run Flume Creek, too. But this time we planned for it, and we were making great time. Lost Canyon is scenic, and we were hoping for good scenery from Flume Creek, too. It’s called Flume Creek…
Join Us!
If you aren’t a Member or Subscriber, you can’t see all of the content on this site. Get membership information to see why this site is best when you join and log in