Trail Run on May 26, 2013
Report and photos by Monica I., Trail Leader
View trail information for Fix It Pass

There were so many trails in the San Rafael Swell and so little time. We stopped at the kiosk at the I-70 exit to Temple Mountain Road and contemplated the map. We soon found the two trails marked the most difficult for 4x4 vehicles, a loop made by Fix It Pass and Devil's Racetrack. That settled it! We took Temple Mountain Road just a short way to the trailhead for Fix It Pass and headed back up to cross the highway at an underpass.

The flat and wide area we were in was called Head of Sinbad. We all agreed that though he wasn't our favorite comedian he didn't deserve it. We soon started up into the hills and came up on the crest of The Hill. ATVs were coming up, grinning from ear to ear. They said that The Hill was challenging, but Fix It Pass itself was even better. We worked our way down The Hill without any issues, but it looked like it could be slippery fun in the other direction.

It felt like we took ten miles to go the next couple of miles as the crow flies. The trail twisted and turned through sections that didn't look like they'd seen vehicles in a while. They obviously got a lot of ATV traffic, and we'd see more of them throughout the day. Everyone was very friendly and happy.

When we hit the wash we turned left and headed back into the hills. We'd explore that wash another day. Another helpful guy on an ATV told us that he used to own a Jeep and the rocks at the pass would be tough. That sounded like a challenge, so we were looking forward to it.

When we came to the saddle kiosk we thought it was Fix It Pass for a minute. We parked and looked at the map again. This wasn't it, so after a brief stop we backed out of our tight parking area at the saddle and headed down the other side. It was very scenic.

We found another fun hill to play on and everyone was really enjoying the trail. Then we could see a big rock and what looked like trail going over another pass. We figured that was Fix It Pass, and we were right. There were the Little Rocks to play on while we climbed, and soon we were up and over the pass and headed down switchbacks. Then things got interesting at the top of the Big Rocks.

First, there was a very narrow section next to a big rock. Monica barely squeezed through with her tires on the edge in soft dirt. She bounced her way to the bottom of the obstacle, having a blast. Then she came back, sat on a rock, and filmed the rest of the group on their way down. It was a great obstacle, but we'd definitely need to run it in the other direction for our next trip.

After the Big Rocks things mellowed out. We went down to follow a wide and sandy wash. We found Swazey's Arch easily enough, but we didn't stop or get out of our vehicles. We had another trail to do.

Though it was sandy, it was filled with washboards. It was bumpy and not that much fun. It was a welcome sight to see signs pointing to Devil's Racetrack at the end of the trail.

This trail was a great time! We were already looking forward to trying it next time in the opposite direction for even more of a challenge. 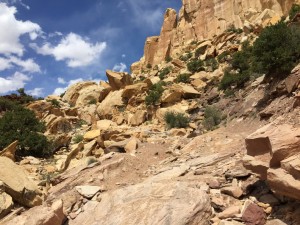 Led by Monica I.
Fix It Pass was our destination because of the chunky, challenging hill up to the pass. We did the trail in the other direction the last time, but this time we were planning on climbing it. We did the easy stretch at the beginning to go under I-70 and get…
Join Us!
If you aren’t a Member or Subscriber, you can’t see all of the content on this site. Get membership information to see why this site is best when you join and log in