Trail Run on May 13, 2017
Report and photos by Monica I., Trail Leader
View trail information for Fix It Pass

Fix It Pass was our destination because of the chunky, challenging hill up to the pass. We did the trail in the other direction the last time, but this time we were planning on climbing it. We did the easy stretch at the beginning to go under I-70 and get to Devil's Racetrack, did that trail, and then we started heading back to I-70 from the far end of the Fix It Pass trail.

That end of the trail is easy and in a wide wash, but it's washboarded the entire way. We stopped at Swazey's Arch for a break from the bumpiness and to enjoy the scenery. It's a big arch.

We cruised along, and we happily found Fix It Pass and the climb with no one on it. It was rocky, and the middle of it looked challenging. Mike went first, slowly working his way up it. He made the corner, and found a great line over the big rock where it was finally flat before heading uphill again. He stopped there to spot the others through it if they needed it.

It was Matt's first trip to Utah with his new Jeep, and the four-door JK had a much different wheelbase than his old, two-door TJ. It was going well until he ended up sliding off of a rock and got his differential caught on the big rock. He backed out and tried a few different lines, but nothing was working. He ended up getting really close to the edge of the cliff to get around it, but then he was through.

Walt watched all of this and chose his line. He got a little hung up on the big rock, but made it through pretty quickly. What a blast!

The rest of the climb was fun, but no one had any issues. Then we had a lot of awesome scenery as we worked our way to the next big hill. That hill was loose and fun, and everyone had a good time scrambling up it.

Once we were past that obstacle, the rest was easy. We went by the trailhead for Devil's Racetrack again, making a full loop. After we were under the highway we looped back around to the I-70 exit and wide spot where we aired up. This is such a good loop and a great day, making it one of our favorites. 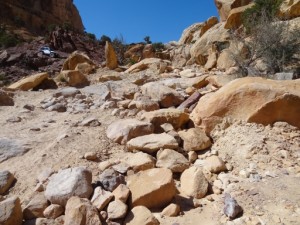 Led by Monica I.
There were so many trails in the San Rafael Swell and so little time. We stopped at the kiosk at the I-70 exit to Temple Mountain Road and contemplated the map. We soon found the two trails marked the most difficult for 4×4 vehicles, a loop made by Fix It…
Join Us!
If you aren’t a Member or Subscriber, you can’t see all of the content on this site. Get membership information to see why this site is best when you join and log in