It was our second snow-filled day in the Steamboat Springs area and it had been snowing all night. It was lightly snowing in the morning as we got ready to hit our only truly difficult trail of the weekend.

We had a good breakfast at the Steamboat Lake Outfitters (SLO) and got an early start for the trail. The gas there wasn't even expensive. The trail wasn't much further north, and we disconnected and let some air out of the tires before starting.

Big Red Park was definitely big. We saw some vehicle tracks ahead of us, but not too many.

The snow was anywhere from a foot to two feet deep as we worked our way through the trees, and the sun even came out a little bit every once in awhile. We got to a crossroads and Monica guessed at one of the forks. When she got to the top she found a forest service sign right in the middle marking it as off-route. With no sign at the bottom it was impossible to tell, though, especially covered in snow. She was up on another trail but didn't know which one.

Mike and Walt took the other fork and circled around, finding out that the newly found trail was 499. We thought we had found the correct 499 so Monica turned around and we headed down the trail. Unfortunately we were on the wrong one, and we wouldn't find out for two more hours.

We headed down the trail that took us down a fairly steep hill. We also went through a good-sized mud puddle. We were following some old ATV tracks, but otherwise there hadn't been anyone out there for awhile. In some places we had to find wide spots between trees, but we always found the trail again.

Suddenly, there was a huge, dead tree in front of us. It had to have been 75 feet tall when it was alive. We were slightly tippy on a slope and there was no way around the big tree. It had to be removed if we were going to continue.

We still thought we were on the right 499 so Mike got out his trusty hatchet. We remembered that it wasn't too long ago when the three of us were on Winding Stairs Road when Mike had the hatchet out, which was weird.

Mike took his turn, then Walt jumped in. Mike got on it again and it finally cracked. Monica used her winch to pull it almost all of the way out of the way.

Mike had to finally use a snatchblock and his winch to pull it to the side of the trail. It took about 20 minutes but we finally got it out of the way of the trail.

We kept weaving our way through the trees, following the ATV tracks. Sometimes we'd even see some faint vehicle tracks. Then we came up on a hiking trail sign and it said that vehicles were no longer allowed on our route.

We took quite some time to reference maps and the GPS units and realized that we were on the wrong 499! We were way out of the way and we hadn't even come to the difficult part of Ellis Jeep Trail yet. We had no choice, so we turned around and headed back.

The way back was a little dicey for Walt when we got to the big uphill. Monica slid around a little, Mike slid a bit too, but then it was really slick for Walt. He had to give it another try and fight it for a bit, but he made it.

When we got back to forest service road 500 we turned right and went just a short way until we saw the correct 499 on the right. We were very happy to see it!

It immediately started downhill and we worried a bit about getting back up it if we had to. We all had winches, though, so it would be possible although slow.

We saw the cabin and were happy to know we were finally on the right road. We snaked through the trees and came upon two big trees down in our path. These two were going to be difficult to get out of the way.

We walked the trail a bit more and found more trees down along the way. It looked like we'd have to turn back. We were pretty bummed, but there was nothing we could do.

Suddenly, a bunch of ATVs showed up. They announced that they never gave up, and began to quickly chop up the deadwood with a chainsaw. It wasn't long before they were through, and they said they'd get us through.

It was so nice to see such responsible and prepared ATV riders. They were extremely friendly and happy to be there, and they really saved our whole day. They always stayed on the trail, which was also really nice to see.

They would stop long enough to cut up deadwood in the trail, then move on. We followed them as they cleared the trail. It didn't take them long to get very far ahead of us, though, because they could move so much faster.

When we got to a big hill we saw them at the bottom, checking to make sure we were still coming. We went down the hill and came out to find the really big bogs. We stayed on the trail and out of the huge bogs, so the ATVs moved on.

The next batch of mud had a big hole in it. We watched an ATV work his way through, then Monica skipped it.

Mike got in it, though. He eased his way in and the mud almost went over his hood. He gently eased down into it and found himself a bit high-centered on the bottom. We were starting to wonder if this was going to be a really messy recovery, but then he worked his way out of it. Nice!

We finally got to the big mud bog. It was pretty long and muddy, but we didn't really have a choice. Monica got some momentum through it and got a big surprise when her Jeep suddenly tipped sideways in a big hole, but she got through it just fine.

Mike was next and was very high-centered not too far into it. He had a long way to go, too. Walt ended up pulling him back with a strap. Mike used a bit more momentum next and then he was through it.

When Mike got to the big hole on the side that tipped Monica sideways he was once again stuck. He needed a big tug this time to get through, but then he was finally through.

Walt made it through without any troubles, and then we were all through the worst of it.

Once we got into the trees we found mud puddle after mud puddle. We even stopped and poked a couple of them with sticks to make sure we weren't going to dive in head first. Though some of them were pretty deep there weren't any big surprises.

When we got to the other end we suddenly found ourselves on a very easy road. We circled around Hog Park Reservoir and had a very late lunch in the mid-afternoon at a picnic table with views of the water. It was pretty cold there next to the reservoir so we didn't stay long.

We started up the Elkhorn Mountain trail but only made it a few miles in before the snow got too deep and the hills were too steep to go on. We'll have to do that one another year when there isn't so much snow.

It was a great day! 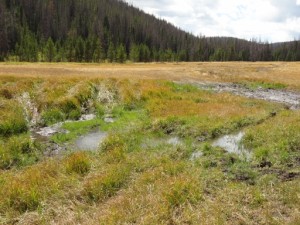 Led by Monica I.
Mike heard a u-joint on his drive shaft going, and he did the smart thing and headed into Steamboat Springs to get it fixed rather than get in the mud with us on Ellis Jeep Trail. We said our morning good-byes and headed for the trailhead. Before starting the trail,…
Join Us!
If you aren’t a Member or Subscriber, you can’t see all of the content on this site. Get membership information to see why this site is best when you join and log in