Mike heard a u-joint on his drive shaft going, and he did the smart thing and headed into Steamboat Springs to get it fixed rather than get in the mud with us on Ellis Jeep Trail. We said our morning good-byes and headed for the trailhead. Before starting the trail, we went to see the grave site at Dead Mexican Park. It was an odd fence around trees with no marker or grave stone of any kind. Still, we saw it so we moved on.

The start of Ellis Jeep Trail is always nice in the morning, going through the big meadows of Little Red Park and Big Red Park. We saw a sheepherder out with his sheep, and his sheepdog wasn't very happy with our tresspassing.

We came around to the north end of Big Red Park and found a caution sign in the road. The entire road was washed out and a bridge wasn't in place yet. We saw a small trail next to the big trail and we followed it, and that took us around the washout. It was a fun little diversion through the shallow Little Snake River and up the bank on the other side.

We noticed that the trail conditions changed drastically. It's possible that other people turned back there, not realizing there was a way around the washout. We saw a few tracks in front of us, but not many. We'd have the trail almost to ourselves for the rest of the trip.

The initial climbs are fun, with many switchbacks and bumpy sections. We worked our way up the hill and soon found ourselves at the intersection in the middle of the long trail. The last time we were there in 2006 it was buried in snow and we accidentally spent a lot of time on the little spur of road 499. We took the time to see what it looked like without snow on it, and it was uneventful. It got narrow before where we turned around last time, and this time we played it smart and turned around earlier.

We were excited to check out the Sierra Madre CDT, and we found handwritten notes and arrows on the forest service signs pointing the way. We did that trail to the end and came back, and then we continued along Ellis Jeep Trail after visiting with some people on ATVs.

The northern half of the trail has the most fun on it, and we remembered the big descent down the hill. It wasn't bad because it wasn't covered in snow this time. We soon found ourselves in the big meadows. They were scenic and colorful.

We saw someone camping way off to the side of the trail but otherwise we had the bogs to ourselves. They were only muddy ruts until we got to the far one before the trail goes back into the trees. Monica crawled in and crawled out the other side without having to spin her tires too much. It was deep and sloppy and the exit wasn't easy.

Walt got in it but didn't have the same good luck. He spun his tires and worked on it but he couldn't get out. He backed up and couldn't get out that way, either. He was trapped in the bog, and he liked it. He didn't have to give it too many tries before he found his escape.

Roger had a different approach and went at the bog with some momentum. The entrance was steep, however, and that meant he really dove in. He still had to spin his tires a bit to get out, but he made quick work of it.

We all got out to visit and laugh at the nasty swamp stuff hanging off of our Jeeps. There were tough plants at the bottom that were now wrapped around our axles and shock mounts. The mud smelled awful, and it didn't dry quickly. Gross!

After stretching our legs and enjoying the sunshine we got back in our Jeeps and continued on. When we drove through the creek we saw all of the mud washing off of our Jeeps. We really were muddy.

The rest of the trail was easy and mellow. We saw a few people camping but not many considering it was Labor Day weekend. When we got to the main road we turned left to continue on to Elkhorn Mountain.

It was well past noon and we hadn't had lunch, but Mike had texted Roger and said he was on our way. We hoped to meet him for lunch so we didn't eat. We drove through the Lakeview Campground at the Hog Park Reservoir and it was really sad. They had cut down most of the dead trees and it was just an exposed hill with picnic tables and piles of logs everywhere. Not many people were visiting, so we moved on. We heard Mike on the CB before reaching Elkhorn Mountain, so everything worked out really well. 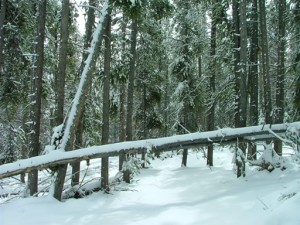 Led by Monica I.
It was our second snow-filled day in the Steamboat Springs area and it had been snowing all night. It was lightly snowing in the morning as we got ready to hit our only truly difficult trail of the weekend. We had a good breakfast at the Steamboat Lake Outfitters (SLO)…
Join Us!
If you aren’t a Member or Subscriber, you can’t see all of the content on this site. Get membership information to see why this site is best when you join and log in