Andy's back! We haven't seen him in years, so it was nice to wheel with him again. We spent most of the morning trying to find a back way from Floyd Hill to Idaho Springs via Beaver Brook Canyon Road but it ended at private property, unfortunately. Roads labeled "Jeep Trail" in mapping software are now closed to all but hikers, so we were out of luck. We ended up taking Squaw Pass Road all the way around, just to take the scenic route to Devil's Canyon. Construction had part of it closed so it took a little longer, but it was still a really nice drive. We aired down at a rest area before Echo Lake Park, and it wasn't long after that when we turned off of the pavement.

The first climb is a fun one. When we got to the intersection we couldn't remember which way was the fun way, so we guessed and took the rightmost fork. That ended up being the way that wasn't as much fun because that meant we did the big hill as a descent. Still, it was bumpy fun.

We popped up to Devil's Hill and then came right back down. Then we went around the big loop in the clockwise direction. When we got to the pullout with the big camping area, we stopped for lunch. It had been sprinkling off and on, and a good portion of our lunch would be spent sitting in a light rain. It wasn't too bad, but the weather lately had been really rainy and chilly in the afternoons. We didn't hang out for very long.

We worked our way down, deciding to save unexplored spurs for another time. We were almost out to the pavement when we came to a traffic jam. A passenger car was on its way down while others were on their way up. A Subaru was across the trail, it's front bumper in the ditch. They said their clutch gave out, so everyone got together to push it out of the ditch. Luckily, they were at a switchback so there was room to park it. We got it all sorted out and we were finally off the trail.

This is a great trail, and we were smiling as we were off to explore more of Cascade Creek. 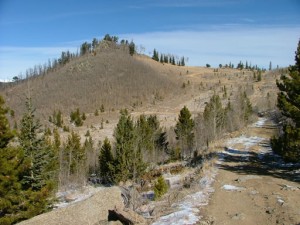 Led by Monica I.
We had just finished Barbour Fork, so we had a good idea what the snow would be like on the trail. They’re both in the same general area, though you have to drive for a bit on the pavement to get between the two trails. The snow ended up being…
Join Us!
If you aren’t a Member or Subscriber, you can’t see all of the content on this site. Get membership information to see why this site is best when you join and log in