Democrat Mountain was our first run of the day. We aired down by a small park just off of Main Street in Empire. It looked like it was going to be a nice sunny day with decent temperatures for November.

Shortly after turning onto the trail, we started up a hill that was entirely covered with ice. We had some fun going up the small hill. Mark F. was with us up to that point, but he decided not to risk the icy hill. Instead, he waited at the trailhead for our return.

Democrat Mountain has some switchbacks at the beginning and they were covered with a bit of snow. That made the trail really fun to drive on. Nobody had any issues with the snow on the trail, though we all enjoyed it.

Then we came to a steep, uphill switchback. Matt made it up with no issues. Gary and Walt had to try a few times to get up the switchback, but it all worked out in the end. After the switchback, the snow started to get deeper.

We kept making our way up the trail. After a few more switchbacks, we were more then half way to the top of Democrat Mountain.

As we got up to around 11,500 feet, the snow was much deeper and it was getting harder to find the trail. So we stopped at a small area that did not have too much snow on it and walked more of what we thought was the trail. The snow was up to our knees at that elevation, so we stopped walking the trail and decided not to drive up any farther. We turned around and started on our way back down to meet back up with Mark.

We did have a lot of fun with the snow on the trail, and we were already looking forward to returning to see the rest of it. Soon we were on our way to finish Bard Creek. 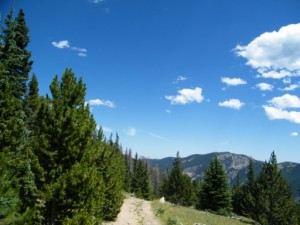 Led by Monica I.
After we did Bard Creek we met Mark and the group headed up to Democrat Mountain. It was definitely a bumpy climb to the top but it was fun. The bumps and the climbing seemed to go on forever. There was a group of hikers that we passed and we…
Join Us!
If you aren’t a Member or Subscriber, you can’t see all of the content on this site. Get membership information to see why this site is best when you join and log in