We ran this trail right after doing Moody Hill. It was raining at that point so it was a little hazy and everything was covered in sloppy mud and big muddy water puddles were all over the trail. This trail ended up being very challenging for everyone and we had a great time.

It wasn't long into the trail before we ran into Mark -- he was supposed to be on the run with us but we ended up late at the trailhead and he ran with another group of people instead. He said we wouldn't get to the top because it was too muddy.

We continued on anyway and we found our first obstacle of rocks, all covered with slick mud. Almost everyone tried a line that would be fine if the rocks were dry, but no one could make it. We all had to go an easier way through them, but it was still fun.

Just after that we came into a clearing with a hill of rock and a few trails leading up it. We thought it was a playground but the trail continued at the top. Everyone got some good flex at the bottom of this hill and with it also covered in mud and running water it gave everyone a little trouble. Kendall was trying to climb it and his Samurai died and he couldn't get it started again. Ladd had to pull him back down (Kendall saved Ladd at Slaughterhouse Gulch so it's only fair).

Not much further than that and we found ourselves on an even bigger hill of wet rocks. These were also a lot of fun! Monica, Landon and Brian were further up the trail while Kendall was wrestling with the rocks. It turned out that Kendall was only running on two cylinders the whole day, so he plugged the other two in and he was really good to go!

We ran into some more people coming down, saying they tried to get past the mud-covered rocks and couldn't do it. We had to go see for ourselves, so we kept going.

It wasn't long before we found the problem area. It was a mess of rocks on a hill that was basically clay it was so wet. It was even hard to stand on it was so slick. Bob gave a couple lines a try but he couldn't get through even the beginning part of it as he tried to finesse his way through.

Kendall gave it a shot (and a lot more gas) and made it past the rocks. There were no tracks past these rocks, so Kendall seemed to be the first of the day!

Monica tried Kendall's line and made it up too. There was a lot of sliding but as long as she didn't stop it worked out just fine. Bob tried this approach too and he also made it past the rocks. These were the only three who tried -- Ladd would have tried but he was taking a nap in his Jeep while we were tackling the mess.

Coming down off of those rocks was almost as challenging as going up. We all basically slid and scraped our way down the other side where it was way too messy to go up. Monica ended up sideways on the trail at the end of the sliding. What a mess!

We made it back down in one piece and aired up at the Moody Hill trailhead. It was a rainy day but it made the trails more challenging, which is always good! 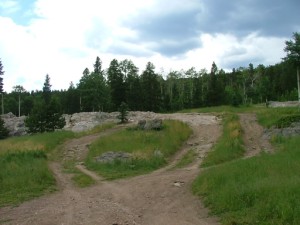