We ran this trail immediately after running Moody Hill, where our bad luck started. We had beautiful weather all the way through Moody Hill, but then as we started Crystal Mountain the weather began to change and we started hearing thunder.

We first tried this trail in 2004 during about two weeks of rain. Though we made it pretty far that day we didn't make it to the top. We made it maybe 2 miles into the trail before the muddy rocks just wouldn't let us go any further. At that point we figured we'd have to wait until 2005 to see the end of the trail.

We headed up the trail and Monica's Jeep started coming close to dying, then reviving itself. Feathering the gas pedal didn't seem to make a difference. She pulled into an open area and everyone got out to look.

The oil pressure was low and it would rev very low, coming very close to dying again. After awhile it started to run okay for a bit again so she shut it off so everyone could take a closer look.

We'd been in the Coney Flats lake a couple weeks before so we originally thought it was water in the engine somewhere. A check of the dipstick showed clean oil and no water.

The flies were biting so we headed up again. It was only a few moments before Monica's Jeep started in again. We decided to keep going until it just wouldn't cooperate anymore.

We took the right turn to start up the whoopdeedoo section and the rocky areas. Monica was really having to go fast to make it through the obstacles and still keep running. We figured we'd park her Jeep somewhere more secluded, then continue on in the other two Jeeps.

We got as far as we could, just past the big slab of rock. After much discussion we decided we wouldn't leave the Jeep alone so we were all fine with heading back. We made it less than 2 miles into the trail.

So we are now two for two -- two tries on Crystal Mountain, and we still haven't seen the second half of the trail. But we'll keep trying! We had a great dinner at Sevy's Canyon Grille in Loveland, so it all worked out in the end. 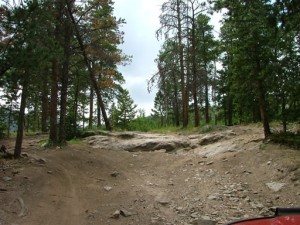 Led by Monica I.
We haven’t had much luck with this trail, as a group. When we went in 2004 it had been raining for weeks and the trail was so muddy we had a lot of difficulty, then we were turned around by the start of the rocks. In 2005 we were turned…
Join Us!
If you aren’t a Member or Subscriber, you can’t see all of the content on this site. Get membership information to see why this site is best when you join and log in