Our plans for Crystal Geyser didn't turn out exactly as we'd hoped. We were thinking we'd do the whole trail on Wednesday, but then we got derailed by the Tenmile Wash trail because it took much longer than we thought it would. As a result, we did the first two sections of Crystal Geyser on Wednesday and the last four sections on Saturday. Unfortunately, Roger was with us on Wednesday but not on Saturday, so he missed the majority of the trail.

The trail started out very cool, and kept it up. The Rainbow Rocks were an awesome sight first thing Wednesday morning, and we were already loving that section. When we got to the wash, Monica almost thought the trail ended there. But then she saw that it turned left at the bottom of the hill and into the sand, so we were good to go.

The wash obstacle was fun, and everyone took their own line through it. Jeffrey had new 33" tires and a new lift, and this was his first big climb with those. He was definitely all smiles.

Weaving through the big rocks was pretty awesome, and a nice addition to the trail. The other group was behind us, and soon we hit the second section of the trail and we took off. We lost them for quite awhile at that point, though we'd see them again at lunch.

The smooth sand of section two was a blast, and it's Michael's forte. He caught some air in a few spots, cracking everyone up. There were quite a few surprise jumps along the way, but Michael enjoyed every last one.

We crossed the tiny creek and noted the big cottonwood tree as a possible lunch spot, but we didn't need to. Just around the corner and down a hill was the trailhead for Tenmile Wash, with lots of trees and plenty of room. It was a bit early, but we decided this would be a good spot for lunch so we stopped. The other group passed by us at that point, and then we headed in to do Tenmile Wash.

We completed the majority of Crystal Geyser on Saturday, after we played on the White Wash Sand Dunes. We went back to our lunch spot at the Tenmile Wash trailhead, and then backtracked back just a little bit to a flat spot of slickrock. We stopped there for lunch this time, and the scenery was phenomenal.

We didn't take a long lunch, and soon we were off again, backtracking to where we came in from the sand dunes. Then it was off on the easy road, and to the start of the next section. It would have been difficult to spot without the GPS coordinates.

Mike and Roger had done most of section three on their way from Tenmile Wash, so Mike was getting to enjoy it a second time. This part was a blast! It started off nice with the rocky, chunky sections, and the scenery was pretty cool. It was like we were on the moon sometimes. We headed off and up the hill climb, and everyone had a really good time there, too. This section was definitely fun, and everyone was in a great mood.

We followed each other up and down hills, and almost drove right by our left turn that we needed to make. We would have kept going over Dee Pass and we would have found our way eventually, but we really wanted to do the correct trail the first time out. Everything worked out, and we found our way through that section to the super-fast section four.

We had been on that part of Ruby Ranch Road earlier in the day, and we all recognized the weird intersection. We headed off on Salt Wash Road, and this road was just as smooth and nice as Ruby Ranch Road. We cruised along, stopping suddenly when we came to section five. That turn would be really easy to miss without a GPS.

This part was fun but not as rough as the other rough sections. It made everyone mellow out. We went through some washes and canyons, and the scenery changed again. The purple stripes and purple hills were pretty weird, but cool to look at. It wasn't the moon, but it was weird. We cruised along, finding the trail easily enough even though it wasn't very well-traveled.

We stopped at the lean-to to stretch our legs. It was quite a bit cooler in the shade of the logs above our heads when we stood inside it. We all wondered what it was for -- especially what the collections of stones outside it were for. Weird!

Just after that, we saw bleached bones near the trail and then we were out and onto section six, the last easy section. It wasn't long before we were right by the kiosk and at the end of the trail.

We wanted to do the Book Cliffs trail next, but we were aired down and two exits from the Book Cliffs trailhead on I-70. We figured we'd just wing it, so we ended up on the old highway between the train tracks and I-70. It was really cool! It felt like a part of history.

When the old highway pavement ended at the Ruby Ranch Road exit, we continued on. There were dirt roads next to the railroad tracks, so we just followed them. We stopped at the big underpasses under the tracks that were marked as "old railroad grade" on the USGS maps. Further research didn't turn up anything, so we still don't know what they're for. They were pretty cool, though.

We also got lucky and got to be on the trail when a train went by going the same direction. It was so fun! We raced it going about 20mph and about 10 feet from the train. We are definitely going to head up there to do that again. What a blast!

We finished our fun at the parking area next to the convenience store at Crescent Junction, and then we headed off to the Book Cliffs. Good times! 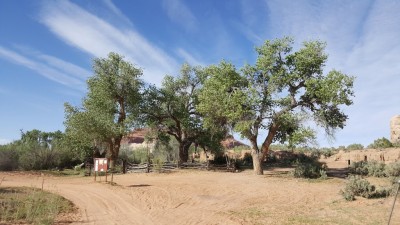 Led by Monica I.
We did Crystal Geyser back in 2008 and we remembered that it took a long time.  We were lost a few times along the way the last time, and it seemed like such a long trail.  This time, we had the GPS track and we knew what to expect.  It…
Join Us!
If you aren’t a Member or Subscriber, you can’t see all of the content on this site. Get membership information to see why this site is best when you join and log in