Trail Run on May 14, 2017
Report and photos by Monica I., Trail Leader
View trail information for Crystal Geyser

We did Crystal Geyser back in 2008 and we remembered that it took a long time.  We were lost a few times along the way the last time, and it seemed like such a long trail.  This time, we had the GPS track and we knew what to expect.  It was still long, but it was nice as it took us from mid-afternoon to evening.

We came off of Secret Spire and started Crystal Geyser at the southern end near Tombstone Butte.  As we cruised around the mesa's edge, it looked like the trail was just going to end.  Then we were in the wash and having a good time climbing out of it.  There were a few different lines on the way out, and Walt had a bit more fun than he was intending.  Still, he made it up with a little spotting.

Then we hit the sandy section and we took off, enjoying the fast track and the fact that we could see for a long distance.  That meant there was little risk of running into someone.  There is something that is so much fun about sand.

We turned left on Levi Well Road and went past Dripping Spring in Tenmile Canyon, in the wash.  That's a fun and adventurous trail, but we'd have to leave it for another time.  So, we kept going.

A right turn on the next road took us away from the White Wash Sand Dunes, also saved for another time.  We almost missed the turn to the fun and challenging section, but we caught it in time to turn left and leave the nice road for a true trail.  This is where all the fun is, and it didn't disappoint.  It's a rocky and slippery climb, and there is a spot where your front tire gets a bit of air.  Mike caught a little bit, but Matt had all of his tires on the ground.  Walt then had a bit of a struggle when he caught too much air to go forward and couldn't easily go back down.  Matt spotted him up and out of it by having him turn into it a bit.  Fun!

After another hill climb, we came down onto a wide meadow and our track turned away from a decent trail and onto a track we could barely see.  We took our old track anyway, and it led us through the meadow to where it joined up again with the better trail.  That meant it had been rerouted in the last nine years.  Matt and Walt waited there while Mike ran back to the other intersection and returned, so it could be mapped.  Even with the track, we didn't take a direct route along this trail yet again.

We turned left at the Salt Wash and we were on a fast and well-maintained road.  That meant we made really good time for a while, which was good as the light was fading.  It was short lived, though, when we hit the area of purple hills.  It's a creepy and weird place, but we enjoyed it.

We stopped at the lean-to for a little bit to check it out.  It looked just like it did the first time we saw it.  But then we continued on, and the road was easy up to the end where we hit pavement and a short drive to Green River and dinner at the Tamerisk Restaurant.  It was a long day, but definitely a fun one! 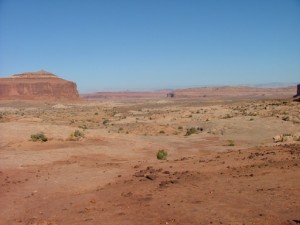 Led by Monica I.
Our plans for Crystal Geyser didn’t turn out exactly as we’d hoped. We were thinking we’d do the whole trail on Wednesday, but then we got derailed by the Tenmile Wash trail because it took much longer than we thought it would. As a result, we did the first two…
Join Us!
If you aren’t a Member or Subscriber, you can’t see all of the content on this site. Get membership information to see why this site is best when you join and log in