We had done Lost Canyon and Flume Creek already, so we were already aired down when we got to Clear Creek Reservoir. That was a good thing, because the road from the highway to the Clohesy Lake trailhead was a rough one. There was a bit of traffic on the road, but we made good time.

We pulled off of the road to check out an old, preserved cabin. It was boarded up, but it was in great shape. There was even an old outhouse in the trees next to the cabin.

We got back on the road and kept heading west. We slowed down but didn't stop at Vicksburg, thinking we'd stop later. When we got to Rockdale we turned onto the trail.

We drove up to the creek crossing but it didn't seem like the right trail so we tried another trail. That one just went to a campsite so we checked the maps. How fun -- it actually crosses the creek! That was a nice surprise. It wasn't very deep, thankfully.

Crossing the two creeks was a blast, and then we had a nice surprise from the rocks in the trail immediately after getting out of the water. It was a fun start to a fun climb up a hill.

We happily followed the canyon made by the Lake Fork, through the trees and between big mountains. The mountains to the west were especially impressive. One of them had a cut in it that looked like an old ski slope. It was very scenic.

We were heading through the trees when we came to a sawhorse made into a sign. The makeshift gate had been moved to the side of the trail. It said that the trail was impassable due to a mudslide and it warned people not to cross it.

We discussed what we would do. We could see tire tracks in the dirt ahead of us on the trail, so someone had gone farther. In the end, we decided to drive until we found mud and then turn around if it was still wet.

We got to the first mudslide and it was dry. It wasn't very wide, and tracks crossed through it to pick up the trail on the other side. It looked like it may have been a couple feet deep across the trail.

It wasn't long before we got to the second mudslide across the trail and that one was huge. It was very wide and we couldn't believe how much mud was across the trail. It had dragged boulders along with it and taken out trees. It must have been a mess.

The original trail went straight, but it was now covered in dried mud and big rocks. The new trail was marked with bright ribbons tied to trees, and we followed the ribbons and tire tracks as the new trail went away from the old trail, across the dried mud, and then back to the old trail on the other side. It was crazy!

We didn't see any other mudslide areas. When we got to the meadow we found people camping nearby. There were mud puddles along the way.

We parked at the fence and Gary decided to stay back with the Jeeps. The rest of us walked to the lake. It was sad to see the fish hatchery building burned. From pictures we'd seen, it looked like a big, impressive building right on the water. There was an old outhouse nearby that still stood with paint still on the outside.

We started walking back and it started sprinkling. By the time we got back to the Jeeps it was pouring rain. Good timing! We worked our way back to the trailhead and the rain slowed down and even stopped at times, but this rain storm wasn't going anywhere anytime soon.

We aired up in the rain and the cold at the parking area near the Clear Creek Reservoir, which was handy. Then we went into Leadville for dinner at Quincy's (of course). It continued raining while we had dinner, but then it stopped before we headed for home. The road was foggy on the way back to I-70, but then completely dry as we got closer to Denver.

We'll definitely do Clohesy Lake again (there are trails near Winfield still left to explore). Clohesy Lake was a blast! 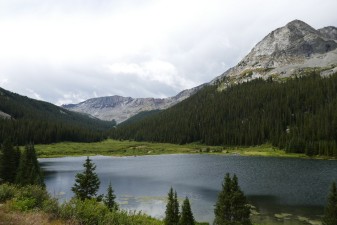 Led by Monica I.
We hadn’t seen Clohesy Lake in a while, and we were curious about how the trail had recovered from the last, big mudslide that trapped some people on the far end of the trail.  We did the majority of the Clear Creek Reservoir trail and got to our marker for…
Join Us!
If you aren’t a Member or Subscriber, you can’t see all of the content on this site. Get membership information to see why this site is best when you join and log in