We hadn't seen Clohesy Lake in a while, and we were curious about how the trail had recovered from the last, big mudslide that trapped some people on the far end of the trail.  We did the majority of the Clear Creek Reservoir trail and got to our marker for the Clohesy Lake trailhead to find a big gate across the trail.  Luckily, we went a little farther to find that the trail was merely rerouted around the back of the cabins instead, so we were good to go after a little delay.

There were people camping near the trailhead and we were already aired down, so we didn't stop.  Instead, we drove right into the creek.  This part of the trail is really cool because it's not often you get to drive along a creek, right in the water.  It's not too long, though, before you pop out of the water and through the fun and rocky obstacle that takes you onto dry land.

It had been raining all morning, and we weren't sure it was going to stop.  It made the trail soggy and filled with puddles, which was fun.  But it was chilly out, so we didn't feel like stopping anywhere.  That meant it was a pretty quick trip.

The mudslide area was obvious, still, but plants and trees were already all over it.  If you weren't looking for it, you might even miss it.  We followed our old GPS track and the trail across it on the way to the lake that curved across the old slide.  On the way back, we took the more direct route across it.  Either way worked, and it seemed like the more direct route would end up being the permanent trail.

We saw quite a few vehicles on the trail, and a lot of them were shiny SUVs rather than trail vehicles.  When we got to the end of the trail, we took the last, few parking spaces that were left.  It was still looking overcast, though the rain had stopped.  We bundled up, prepared for rain, and headed off to hike the short distance to the lake.

People were camped here and there along the trail as well as along the hike.  The scenery was beautiful, and as we stood above the lake the skies cleared and the weather got a bit warmer.  It was still pretty chilly, though, and we imagined it was a cold night in tents near the lake.  By the time we walked back to our vehicles, the sun was out and the puffy clouds were burning off here and there.

We hung out for a bit for snacks and chit chat, and then we got back into muddy vehicles to head back.  With all of the wet trees and trail, the sunshine made the scenery very pretty.  We snapped a lot of pictures on the way back.

After we crossed the creek again we took the short spur up the hill to find the place almost to ourselves.  It was a great spot for lunch, and we sat on the big rock near the river to enjoy the mountain views.  We saw a lot of aspen trees turning yellow already, victims of drought conditions earlier in the season.  It was colorful, and a very nice lunch.

We soon headed back to the Clear Creek Reservoir trail and headed out to the rest of the day on the trails with great weather. 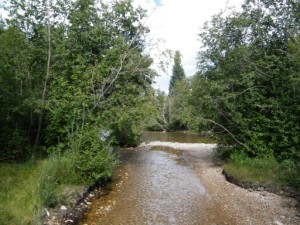 Led by Monica I.
We had done Lost Canyon and Flume Creek already, so we were already aired down when we got to Clear Creek Reservoir. That was a good thing, because the road from the highway to the Clohesy Lake trailhead was a rough one. There was a bit of traffic on the…
Join Us!
If you aren’t a Member or Subscriber, you can’t see all of the content on this site. Get membership information to see why this site is best when you join and log in