After all of the snow we found on Warden Gulch we were expecting the same struggles on Cinnamon Gulch. Luckily, we wouldn't have any issues at all and we made it all the way to the end.

Matt had his father-in-law with him all the way from Germany, and we were excited to show him the Pennsylvania Mine buildings. Cinnamon Gulch is the trail in this area that has all of the old buildings, so this one was going to be a highlight for him, hopefully.

There was someone in a truck who was moving lots of rocks from the trailhead over to the water reclamation area, and we passed him a few times. We headed over to that area first, stopping at the bottom of the main building. A few people got out to explore a bit, while the rest of us stayed near the Jeeps. There was a bit of snow, but not too much. It made everything very scenic under deep blue skies.

A Toyota FJ Cruiser joined us for a minute and then they left. We would see them again on Chihuahua Gulch, though they didn't finish either trail. We all wouldn't be as adventurous if we were out there alone like they were, so it made sense.

After checking out the big building we drove around it to the top. The snow was deep up above the building in between tight trees, but it didn't require much work to get through it. It was powder and it didn't ice up when the tires hit it.

We went over to check out the other building, and a few people walked up in it. The rest of us visited, enjoying the sun. Matt's father-in-law took many pictures, and he seemed to really enjoy seeing bits of Colorado's history.

After viewing the mining area, the tracks ended in the snow. That wasn't going to stop us, though. We headed up the hill, and it really wasn't difficult at all. We were soon up at the blue shack and at the final bits of trail.

In the snow, the last bit of trail was difficult to find. It was difficult to find the first time, when there wasn't much snow on the ground. We decided to play it safe just in case we ended up wandering off trail, so we stopped and turned around when it started getting confusing.

The way down was easy, and soon we were back on the Peru Creek trail. We turned left to head down to Chihuahua Gulch. We really enjoyed ourselves on Cinnamon Gulch. 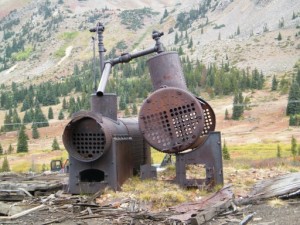