We hadn't run China Wall since 2003 so it was definitely time to go again. China Wall is a great trail for winter wheeling, so we were looking forward to it. We hadn't had much snow for a week or two, then it snowed quite a lot the day before we went. It made for a perfect day with snow, sun and no ice or mud.

We stopped in Jefferson to get some gas and stop for snacks, then we were on our way. It took about 30 minutes to get to the trailhead from there on snowy roads. We found the trailhead pretty easily this time (it's a good one to have in a GPS ahead of time).

A few people aired down and everyone disconnected their sway bars. There was a set of tracks in the snow already on the trail but it looked like it was from the day before. It looked like we were going to have the trail to ourselves.

The tracks led down the spur to the right just before the climb up the first hill, then fresh tracks came out of it and went up the true hill. It looked like the owner had camped the night before and was up on the trail during their second day there.

We all took the right side up and found ourselves on the narrow shelf road on untouched snow (the other vehicle had gone around to the left). It was about an inch of snow on dry dirt so it wasn't slick. The sun was out and it was a gorgeous day. The temperature said it was below 20 degrees but with the sun and no wind it felt much warmer. We all had our windows down to enjoy the fresh air.

We got to the intersection pretty quickly and kept going on Forest Road 212. We soon found the vehicle that had been ahead of us -- a single hunter. We went by him and found ourselves on virgin snow.

The flexy rocks were fun and everyone tried them. No one had any issues and we got some good pictures.

Once we got to the tippy section everyone took the most difficult lines. It was a little slick but everyone made it through just fine. It's tippy there!

When we got to the optional rock slab everyone considered it but it was snowy so we all drove by it and made our way down the hill and to the creek. We turned around and worked our way back up the hill. Even the hill was easy because the snow was so fresh and nothing was slick.

We checked out the rock slab again and of course everyone decided to try it this time. Eric got some major wheel stands while he experimented with a few different lines. It was pretty slick at the bottom with the snow and he was having a hard time getting a good grip on the rocks. It seemed there were a bunch of very difficult and risky lines up it, a couple of easy lines up it, and nothing in between. He finally took an easy line and got right up it.

Don and Gary both gave it a few tries but they were having the same issues -- big wheel stands and not enough traction. They took easier lines in the end and made it through just fine.

Michael tried a different line, trying to find something not quite as easy as the easy lines but not as difficult as the ones that gave you such extreme wheel stands. He ended up straddling the bump of rock in the middle and hitting his rear differential but he made it through. It seemed that the line he found was a bit more difficult but he still made it look easy.

Roger had the only long wheelbase and he really looked like he was going to make it up the difficult line without an issue. His left front tire kept getting pretty high in the air but he didn't back down from it. He got pretty sideways on the rock slab and then finally had to give up and take a line between the easy and the medium ones. He definitely got the closest, though.

Mike did like he usually does and just drove right up to it and over it without messing around. He always makes things look pretty easy.

Don had to try another line but it wasn't going to work. It was time to give up and keep going.

The sun was starting to leave us when we got to the tippy section of rock. It was uphill this time so it was quite a bit more difficult and challenging.

Eric slid a little but otherwise got through it without any problems.

Michael got up the first bit of rocks without any problem, but when he got to the tippy part he slid sideways. He kept trying to straighten his Jeep out but it kept getting him more and more sideways on the snowy, slippery rocks. He finally stopped and everyone got out to help.

Michael put it in two-wheel drive to swing the back of the Jeep around while a couple of people pushed him sideways in that direction. He slid a bit more but then he came around to face uphill. He got going then and made it through the rest of it without any other problems.

Everyone else slid around a bit but we all made it through. It kept getting more and more slick, but it was still fun.

We got back to the intersection but this time we took FR 204. No one had been down this road since the snow. It got a little confusing in the twisty trail section but we found our way through and around the large rock outcropping.

The downhill section of rocks was a great time. No one scratched or scraped along the rocks, which was good. There were a few contacts with skid plates on the way down but it was all okay.

Almost everyone went back up the hill to turn around and go back down it. It's a great hill!

We worked our way past Box Canyon, often following the fencing to find our way out. We didn't see anyone else or any other tracks, and we opened the gate to get to the highway, closing it again behind us. We aired down at CR 77 then turned right to go back to Jefferson and then Denver.

We were going to go exploring on other trails in the area but we ended up making a day of it on China Wall, having a great time in the sun. What a fantastic winter trail! 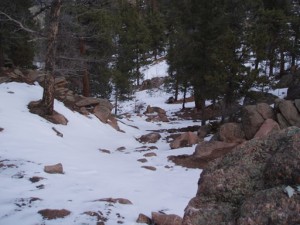