The main goal for the day was to do the rest of Cascade Creek. For years, we had been doing only part of it. It was a network of trails and we planned on seeing all of them before the day was done. We went the short distance from Devil's Canyon to the Cascade Creek trailhead and soon were on our way up.

We planned on doing the usual, short version of the trail first. When we got to the first intersection we turned right and headed uphill. We planned on coming back to that intersection again toward the end of our trip through the maze.

We got to the mine and didn't stop. We were looking forward to the Big Rock Hill so we just kept going. It was raining, so the rocks were slick. Luckily, the mud in this area has little to no clay in it so it wasn't very slick. However, it made some of the rocks even more fun. There were many lines to be taken through parts of the rocky obstacle, and we all chose our own way. When we got to the top, we turned right and headed down to Ute Creek Road.

Normally, we would turn right on Ute Creek Road and head back down to the highway. But we had other plans. We turned left instead and headed up to the main road on Lamartine. Then we turned left to head back into the trail system.

We went through some switchbacks and found ourselves at a tall radio tower. We didn't know it at the time, but it would be the first of three radio towers we'd see on the trail. It was in an open area but the trail kept going, and so did we. We found a truck coming the other way who said it was a little pointless at the end because the trail didn't go anywhere. Still, it was fun so we went to the end. He was right, it didn't go anywhere.

We headed back down and took another way up to the main road near the end of Spring Creek. Then we found our second radio tower. The trail to and from that tower was really rocky in spots, and it was a good time.

Next, we took 710.1 to see the rest of the trail. We found some happy and slightly lost people at the Molly Bawn Mine so we helped them figure out the best way out. Like Gary says, if you're on a trail and you still have gas then you're not lost. We kept going and they planned on heading down Saxon Mountain.

The trail to connect the two sections cuts across a very steep ridge but you can't tell that when you're on it. It's surrounded by tall trees. Though the trail is narrow it's not a shelf road at any point.

We got to the wide area at the main creek crossing and got out to discuss things. It was starting to get dark and we knew the rain was coming. We wanted to see all of the trail, though, so we got back in our vehicles to continue on.

We found a sign pointing the way to Highland Park so we followed it. That took us to our third radio tower. Everyone parked near the tower while Monica headed up to see the end. It was fairly uneventful, so the rest of the group decided to skip it. We were on our way back down when we noticed a sheet of heavy rain almost to us. We took a minute to put windows in and tops on, and we finished just before the rain came. And it was a lot of rain.

As we worked our way down and over to the last connection with the main trail near Saxon Mountain the rain got really heavy. The trail was covered in muddy water. It was actually pretty fun being out in it, especially because the mud wasn't very slick. When we got to the main intersection we turned around and headed back down.

The last remaining section of trail past the very first intersection was a good time. We passed someone on their way up, planning to camp on Saxon Mountain. That didn't sound like very much fun, but they were happy. Camping in the cold rain is still better than work, right?

The remaining rocks were fun, even on the way down. They continued to be a blast for quite a while. As we were nearing the first intersection we passed what seemed to be an old junk yard with a long fence between it and the trail. It was kind of gross and kind of fascinating. We could see lots of old and random things between gaps in the fencing.

It didn't take us long to get back to the trailhead. We all headed back to Idaho Springs to air up in the big parking lot. Andy and Matt headed for home while the rest of us had dinner in town. Even though it was a soggy day without much sunshine it was still a great time. 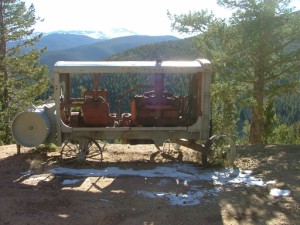 Led by Monica I.
We were already having a good day, and it was still early in the afternoon when we were starting up Cascade Creek. It’s one of our favorite trails in the area, but it’s too bad it’s so short. There was some snow on the trail here and there, but usually…
Join Us!
If you aren’t a Member or Subscriber, you can’t see all of the content on this site. Get membership information to see why this site is best when you join and log in