We crossed our fingers and went to check out the status of the gate to the Middle St. Vrain trail. We hoped to have our annual Independence Day BBQ at the Coney Flats lake. But when we got there we found the gate still closed due to snow. Bummer! We had a back-up plan, though, so no worries. We all aired down at the Middle St. Vrain trailhead and backtracked a little bit to get to the end of Bunce School Road.

There were a lot of people at Camp Dick so it was slow going, but once we got on Bunce School Road we didn't see many people at first. We soon turned off of the trail to do Park Creek and the T-33A Plane Crash trails.

The light was fading when we finally got back on Bunce School Road. With all of the snow from a crazy winter everything was very green. It was a nice, lazy trip to the school at the other end.

We were hoping to do the Ironclads but we were running out of time. Next time!

After airing up at the school, Katie and Andrew went back to their campsite on the Rock Creek trail and the rest of us headed into Boulder for dinner at Red Robin. Even though we didn't get to do Middle St. Vrain and Coney Flats we still had a fantastic day! 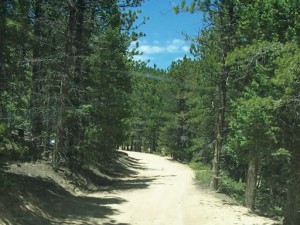