We started the trail from the Camp Dick side to hit the T-33A Plane Crash trail early. We had a small group (only two of us) so we planned on hitting quite a few trails before the day was over.

Camp Dick was quite active for a Monday morning. After airing down at the trailhead we started the trail and headed for the switchbacks. The first switchback is normally a little rougher than it is this year. It looks like a grader had been through, recently.

After climbing the switchbacks we were at the T33-A Plane Crash trailhead. After checking out the plane crash and trail, we headed back to Bunce School Road.

We continued on Bunce School Road looking for a lunch spot. Some of the trail is pretty torn up from early season wheeling and runoff. There is one area that leans you toward a rock that requires your attention, but it wasn't too bad.

We came upon a lunch spot with some rock outcroppings about a mile before our next destination, the Ironclads trailhead. After a nice, relaxed lunch we headed down Bunce School Road and to the next trail.

We returned to Bunce School Road after checking out the Ironclads. It wasn't long before we were at the end of the trail and looking at the old Bunce Schoolhouse.

This was a fun, easy trail that connects to a couple of other trails that are a bit more challenging. Without wasting time, we checked the map and we were off to find the Miller Rock trail. 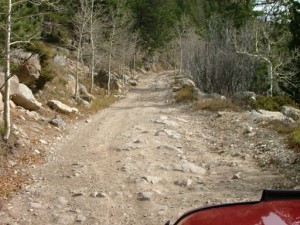