The network of trails around Bull Mountain looked like we'd be going around in circles for a bit but we didn't mind. We didn't want to go home just yet. We started at the west end of the trail and it was easy to start. Then we hit a snag.

There was a backhoe and people working at the creek crossing at the start of the trail. They told us that the section of trail they were working on had washed out and it wouldn't be open until the next day at the earliest. It was a bummer but they said we could get to the other side on the other half of the trail.

Luckily we weren't too far in so we went back out to the trailhead and took the main trail to the east side of Bull Mountain. That was open and it was a nice ride. It was bumpy in some spots but there wasn't anything major.

When we went by the spur to the South Canadian we saw that it was blocked off. It looked temporary, but we wouldn't be doing that part today.

We went over Bull Mountain and started heading down. It was steep in some sections but at least it wasn't muddy. When we got to the intersection with Kiwi Road on the west end the trail was blocked so we couldn't actually go all the way to the trail repairs like they said we could. It was annoying but at least we could get to Kiwi Road.

We took Kiwi Road back around and it was definitely the scenic side. We got behind some people on ATVs who were moving slowly, but we didn't mind. It was a really nice day.

Bull Mountain wasn't the most exciting trail but it had some good scenery. Off to the next one! 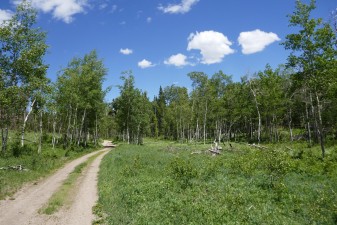 Led by Monica I.
We made some sense of the maze of trails in State Forest State Park, jumping from one to the next since the morning.  Our last trail was Bull Mountain, and it wasn’t even early evening yet.  But it was way too gorgeous at our campground. We’d done Bull Mountain before,…
Join Us!
If you aren’t a Member or Subscriber, you can’t see all of the content on this site. Get membership information to see why this site is best when you join and log in