After two days of wheeling north of Steamboat Springs it was time to head back to Denver. We had to do some trails on the way home, of course, so we gassed up in Steamboat Springs and headed off for Buffalo Pass. We'd seen it before in 2006 but it was covered in snow, so we were looking forward to seeing it in the sunshine.

The trail is easy enough to find, and we were soon off of the pavement. We had aired up a little for the trip from our cabins up north, and it was soon apparent that we had too much air in our tires. We pulled off in a wide section and let some air out, and then it was a smoother ride.

We saw quite a few people, but not as many as we were expecting for Labor Day weekend. Everyone was happy and friendly, and it rubbed off on our moods. The skies were blue and the weather was perfect, and we couldn't be happier.

It felt like no time at all before we got to the pass. We stopped there, and we found only one parking spot. We parked in a big line in that one spot, each one blocking in the Jeep in front. That works!

When we were there before, we only went to the pass and then back out the way we came in. We were looking forward to seeing the other half, so we hopped in our Jeeps and continued on. The other half of the trail was much smoother and wider, and it was a relaxing trip. We didn't see nearly as many people on the eastern half.

We took some time to do Sawmill Creek and Hidden Lakes Road, but then we were back on the trail. It was really windy and getting chilly, so we stopped at the end of the dirt road to bundle up. Monica's soft top was broken so it took some effort to get it reattached, but it all worked out. We were still ready for more wheeling, so we headed down the highway to get to Rabbit Ears Peak. Buffalo Pass was really nice, and we planned on taking it every time we were in the area. 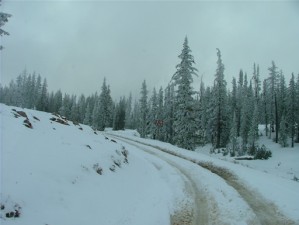 Led by Monica I.
We were starting our extended weekend in the Steamboat Springs area and we ran this after running Williams Peak Road on the way there. We thought we could find a back way up to Buffalo Pass after studying some topo maps, so we started some exploration. We turned east on…
Join Us!
If you aren’t a Member or Subscriber, you can’t see all of the content on this site. Get membership information to see why this site is best when you join and log in