We were starting our extended weekend in the Steamboat Springs area and we ran this after running Williams Peak Road on the way there. We thought we could find a back way up to Buffalo Pass after studying some topo maps, so we started some exploration.

We turned east on Highway 14 before getting to Rabbit Ears Pass. There were quite a few well-marked roads going north off of the highway and it looked like many would connect to Buffalo Pass. We checked out about four of them, but nothing went through. It was all private property.

We had talked with the Routt County forest service people before our trip, and they said that there were no vehicle roads south of Fish Creek Reservoir, so the roads we could see north of Rabbit Ears Pass were out, too. It looked like we'd have to do it the regular way after all.

We got back on the highway and went over Rabbit Ears Pass and into Steamboat Springs. After a quick stop at McDonald's for some french fries and caffeine we were off again.

We stopped on the side of Strawberry Park Road to briefly check our map, and a local person stopped by to give us directions to the pass. He was very friendly, but we soon found out that he had told us to turn around and go the other direction so we'd miss the trail. We should have looked at the map a bit longer instead of trusting someone else's directions, apparently. Not everyone likes to see Jeeps in their neighborhood.

After getting diverted for a few minutes we were back on track and soon at the trail. There was a bit of traffic as we headed up. We soon stopped in a parking area to disconnect our sway bars as it promised to be a bumpy ride.

We climbed to the top and found it was snowing. It was snowing pretty hard in places, but the trail wasn't too slick. We passed a couple of other vehicles who were coming down in the other direction.

We noticed that we were following vehicle tracks that also had snowboard tracks next to them. Someone was getting pulled behind a vehicle while on a snowboard. The trail was too rough to get any speed going, so it must have been a slow ride.

Soon we saw a Cherokee coming down our way with two snowboarders behind him holding on to what looked like waterskiing ropes. They looked like they were having a lot of fun!

We made it up to Buffalo Pass and found a lot of cars there. People were building ramps of snow on the side of the hill and snowboarding down it. It was really snowy and it was still coming down, and they looked like they were really having a good time.

Mike blazed a trail along the road that went through the Summit Lake Campground. Monica was taking pictures and slid off the road and had some troubles getting back on it and out of the small ditch until she remembered she had a rear locker. Then she got out just fine.

Walt blazed a little bit of another trail, then Mike went off to the east. He decided it might not be a good idea for us to continue any further in case the snow got even heavier. We decided to turn around and head back down.

The trip down was nice and not at all difficult. It was good to get out of the snow, though it was snowing in Steamboat Springs. Walt and Georgina were staying in Steamboat Springs so they stayed in town while Mike and Monica headed up to Clark and a big cabin they had rented up there. It ended up being a really nice place to stay.

It was a snowy first day, but we had a great time. 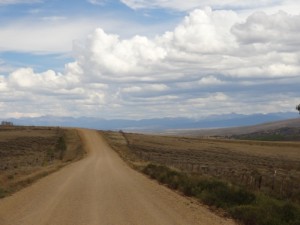 Led by Monica I.
After two days of wheeling north of Steamboat Springs it was time to head back to Denver. We had to do some trails on the way home, of course, so we gassed up in Steamboat Springs and headed off for Buffalo Pass. We’d seen it before in 2006 but it…
Join Us!
If you aren’t a Member or Subscriber, you can’t see all of the content on this site. Get membership information to see why this site is best when you join and log in