This was the first time we ran this trail, and it was worth it. We were expecting a simple dirt road, but we found a lot more.

It was easy to find, with good parking at the trailhead gate. The trail itself was fairly mellow, with some nice rocky sections here and there. It was often in the trees, but not always, opening up to some nice views at times.

We stopped at the first shady area, getting out of the sun for a bit. It was hot! We would see the same group of hikers along the trail, and they passed us at this point. We all chatted for a bit, but then continued on.

We decided to run all of 330 first, and then check out the spurs. There was someone camping at the far end of 330, and it looked like a good place. It was sandy and flat.

There were also lots of hiking trailheads along the trail. This could really be a great place to camp and hike all weekend. We didn't see too many people, either.

We saw the hikers just off the trail, along a spur that wasn't numbered. We thought we'd go check it out, and we were glad we did. It suddenly put us at the edge of a big drop-off, and the views were amazing. This would be a fabulous place to camp, and you could bring a whole group of people. We really enjoyed the scenery.

We explored 330C first, and though it had a good camp spot it was pretty uneventful. At one point, Barbie decided she'd had enough and she jumped off of Monica's antenna. Everyone looked for awhile but couldn't find her, but then she was found on top of Monica's Jeep.

We explored 330B, too. It had a nice section of rocks, and where it abruptly ended it looked pretty interesting. The trail continued, but only as a narrow hiking trail. That would be fun to explore.

It wasn't long before we were out again, at the trailhead. This was a nice trail because of the views, and we'd be back again. 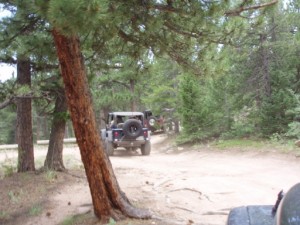 Led by Ladd G.
We started the day with Rock Creek, and Bright Trail was our second trail of the day. On the way up to Rock Creek we looked for Taylor Road, and noted it was just south of mile marker 17, and that made it easy to find on the way back….
Join Us!
If you aren’t a Member or Subscriber, you can’t see all of the content on this site. Get membership information to see why this site is best when you join and log in