We started the day with Rock Creek, and Bright Trail was our second trail of the day. On the way up to Rock Creek we looked for Taylor Road, and noted it was just south of mile marker 17, and that made it easy to find on the way back.

None of us had done Bright Trail before, so weren't sure what to expect. We were hoping for a nice place to have lunch somewhere on the trail.

The entry off Taylor Road was easy and smooth through a small residential area. As we got onto the trail it was still pretty mellow. We were hoping for some views, and we could see through the trees along the way. We knew there were some marked spurs off of forest service road 330 that went to campsites, and we thought about going down one to have lunch. In the end, we decided to pass the campsites and instead we headed to the end of the trail. We'd already seen a lot of campsites on Rock Creek.

We took the unmarked spur past forest service roads 330B and 330C since it was supposed to be scenic, and it was! We did not expect to see such nice views. It was great, and a nice place for lunch. There were several campsites set up and there was room for many more. This would be a great place for a bunch of folks to get together for a group camping stay. The drop off at the end was pretty steep -- sleep walkers be warned!

After lunch we headed back out to go to Ironclads. We changed the leader for the group at this point to Ladd because he was familiar with that area and had been on Ironclads before. 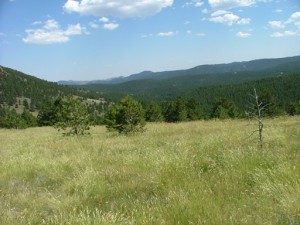 Led by Monica I.
This was the first time we ran this trail, and it was worth it. We were expecting a simple dirt road, but we found a lot more. We ran Johnny Park Road first, thinking that Bright Trail went all the way through to connect with that trail. It was just…
Join Us!
If you aren’t a Member or Subscriber, you can’t see all of the content on this site. Get membership information to see why this site is best when you join and log in