We had just completed a lot of miles of trails and we found ourselves on Cottonwood Wash, heading for Blanding and the hotel. The sun was completely down. Why not add another trail to the mix?

Monica had done the Blanding Cutoff trail before but it was new to Mike and Hoa. They wouldn't get to see much of it but we all voted on doing it anyway.

We stopped for a while at the west end of the trail at its intersection with Cottonwood Wash. Hoa wanted to get some night shots of the sky and the clouds were nice. He took a bunch of pictures of the Milky Way and the stars around us. A lot of planes travel over that area.

The sky started getting lighter and then the moon came out. It was nearly full, and suddenly we could see everything around us. Hoa took some cool pictures that made it look like morning instead of night, sunrise instead of moonrise. It was pretty chilly out there but it was nice hanging out under the stars.

But we left for town eventually. We didn't see any other vehicles on the way. We chatted on the CB the entire time and it made it a nice trip.

It's not a long trail and it wasn't long before we were on pavement in Blanding. The restaurants were closed so we found dinner as well as we could.

Mike managed to leave his camera at the west end of the trail somewhere when we were hanging out, so in the morning he did the Blanding Cutoff trail again and found it there in the dirt. Lucky! He got to see the trail and he found his camera. Hoa will just have to see the trail next time.

It was a long day and we ended up back in Blanding on fumes (we didn't use the extra fuel we brought). Those are the best kinds of days. 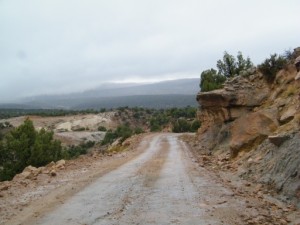 Led by Monica I.
Note that the Blanding Cutoff was run on October 20th but it was dark, so pictures were not taken. We returned on October 22nd to take some pictures but could not complete the trail due to the previous night’s rain. The associated pictures are actually from October 22nd, 2010. It…
Join Us!
If you aren’t a Member or Subscriber, you can’t see all of the content on this site. Get membership information to see why this site is best when you join and log in