Note that the Blanding Cutoff was run on October 20th but it was dark, so pictures were not taken. We returned on October 22nd to take some pictures but could not complete the trail due to the previous night's rain. The associated pictures are actually from October 22nd, 2010.

It was dark when we came off of Woodenshoe Buttes, and it made finding the Blanding Cutoff a definite challenge. A few trails and spurs all connect at the west end of the trail, and Monica couldn't find the correct one in the dark. She looped around and eventually ended up back with Walt at the confusing area. It took some exploring but we eventually found our way hiding in plain sight in the dark.

The trail was easy, and we couldn't see much. We could tell that the climb on the west end was next to a cliff, though, so we were careful. The section in the middle was easy, and the descent wasn't too bad at all.

It wasn't long before we were back in Blanding. We had an unsatisfying dinner in town and called it a night.

We had a great day of trail runs on October 21st, and then it started raining. It rained hard all through the night and it was raining off and on on the 22nd when we got up. We decided to risk a trail even though people in town said it was dangerous. We should have listened.

We figured we'd go over to the Blanding Cutoff to get some pictures. The trail was slick and muddy at first, and as we went it kept getting deeper and stickier. We started heading down on the other side and Monica realized that she was pretty much out of control, heading toward a curve on a shelf road. She stopped midway down the hill and Walt stopped at the top.

The mud was very deep and very sticky. It was difficult to walk in, and very difficult to drive on. The cliff was pretty steep, and it was slow and steady work getting the Jeeps turned around and back to relative safety. We were very careful getting back to town.

Walt ended up spending a fortune at the car wash trying to get the mud out of his suddenly out-of-balance wheels. We had our trail lunches at the hotel and decided just to take the day off. It was a bummer (and the first time we've had to do it) but there was too much rain and the mud had too much clay in it to be safe.

Still, we got some pictures of the trail. It all worked itself out, and everyone had a nice nap before dinner. 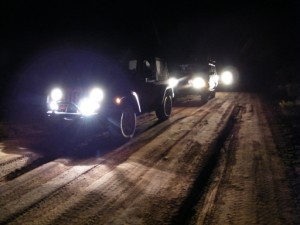 Led by Monica I.
We had just completed a lot of miles of trails and we found ourselves on Cottonwood Wash, heading for Blanding and the hotel. The sun was completely down. Why not add another trail to the mix? Monica had done the Blanding Cutoff trail before but it was new to Mike…
Join Us!
If you aren’t a Member or Subscriber, you can’t see all of the content on this site. Get membership information to see why this site is best when you join and log in