We had been looking forward to doing Blanca Peak again, and it looked like it was going to be a completely new experience. It was dusty and dry in 2005 but this year it had been raining a lot. The top third of the mountains were covered in thick clouds as we started out, and they stayed that way for most of the day. It made everything just a bit more interesting.

We started up the trail and it was a good time from the start, with some good switchbacks and rocks to climb. There was a fun stretch of muddy, slippery rocks near the start, too.

Then we got to Jaws 1 and there was a CJ-7 in front of us, working on the obstacle. He made it through along with the ATV that was with him, then it was our turn. A couple other small groups fell in behind us, and we would run with them for most of the day.

Monica started on Jaws 1 and found it to be pretty slippery. It wasn't too bad, though, and she got over it after a few tries.

Gary thought he'd try a line at the far left, but then everyone informed him that he was extremely tippy and it didn't matter how many people stood on the high side of his Jeep. We couldn't stop him from going over, so he backed out and decided to go the usual way.

He tried a few different approaches but he ended up pretty high centered. He winched himself over, only to get really stuck between some rocks on the other side. He worked his way loose, and he was off.

Bill was next and he got himself a little high centered too, right where Gary just was. A few of the guys from our group and other groups rocked Bill's Jeep and he managed to free himself and get over it.

Don came through the obstacle next and he decided to try yet another line. He drove up the ridge with his driver's side tires, and he just walked right through it. He definitely found the best line through it.

Bob finished up our group and took a line far on the right side. He gave it a little momentum and went right through it without any issues at all.

We enjoyed the rocky sections between Jaws 1 and Jaws 2, and when we came around the corner we found the CJ-7 really stuck in Jaws 2. He was trying to winch himself over it but it wasn't working. Monica decided to go around him first, then winch him up so he could keep going.

Monica tried to go up on the wall to get over Jaws 2 the easiest way, but it was too slick to stay up there. She had to try a few times but eventually momentum was the key and she was over it.

The CJ-7 was winching over Jaws 2 and then his stock tie rod bent almost in two. He was stuck in the middle of the obstacle with a very bent tie rod. Using Monica as an anchor, he tried to use his winch to straighten it but it wasn't working. Eventually it worked when Gary winched it from behind him and he got it pretty straightened out. It turned out that he had lost his rear locker, too, so Monica used a tow strap to pull him the rest of the way through and up to the next switchback.

Gary came through Jaws 2 so quickly that we didn't even get pictures. He didn't have a problem with it at all.

Bill was next and made it easily through the first part, but then the second part was slick and gave him a few troubles. He made it through with only a couple tries.

Don went through it by staying up on the wall a little bit, and he made it look easy.

Bob went up on the wall too, and he also didn't have a single problem all the way through the obstacle.

We had a group of three behind us who we were going to let around us, but they had their own set of issues in Jaws 2. We waited for a little bit but then it became apparent that they weren't going to be any faster than we were, so we continued on.

Jaws 2 1/2 ended up being quite a bit more challenging when wet and muddy than it was the year before. Monica tried to go up on the wall like last year, but it was too slick. She ended up going through it a little sideways after pivoting around, but it worked and she was through it.

Gary was narrow enough in his CJ-7 to go between the bigger rocks, and he barely got tippy at all as he made it through pretty easily.

The group behind us caught up, and pointed out that the easy line was on the right. It was pretty slick, but Bill thought he'd try it anyway. It looked good at the beginning, but then he slid off to the side and a tree caught him and stopped him from going over.

It was quite a scare, but then everyone realized that he was safe. Gary winched him up the rest of the way and Bill found out that even though he was resting his whole Jeep on that tree, he really didn't get any body damage. His CB antenna broke and he scuffed up his soft top corner a little bit, but that was it. Nice luck!

Don managed to stick up on the wall and he drove right through it without a single problem.

Bob was stuck on the wall too and it looked good, but he came pretty close to going over in the middle of the obstacle. His eyes were really big for a few seconds, but then he turned into it and he was down and through it.

We continued on and when we got to Jaws 3 we decided to take the bypass and break for lunch. We figured we'd have a good show watching the groups behind us go through the obstacle.

Suddenly it started raining pretty hard, and we all hid in the dry sections under the trees. Gary was determined to have the best seat in the house, though, so he sat out in the downpour waiting for the group behind us to show up.

It turned out that they had the same issues with the "easy line" up Jaws 2 1/2, so it was a little bit before they got to us. They didn't have to work too hard to get through Jaws 3, though, and it was fun to watch.

After lunch, we headed up to the top. It was easy going except for one ledge that really gave Bill some troubles. He powered through it, though.

The lake looked beautiful, and we went to go look at Jaws 4. It was a slick, muddy mess. Monica tried it quite a few times but couldn't get very far up it. It was just too slick.

Don wanted to give it a try and he couldn't get up it, so he winched himself up. Monica wanted to winch herself up too so they could continue on to the end of the trail, but the rest of the group wanted to call it a day. That meant that we split into two groups again, just like the year before.

Another small group got between Don and Monica, so we were stuck there. The first in their group had to winch, but then the other two tried the line far to the right that is usually easy but dangerous when wet. They both made it, though, and it wasn't too difficult.

That convinced Monica to try it, so she went for it. It took a couple of tries but she finally made it through the obstacle.

Don and Monica continued on, and drove into a massive hail storm at the Blue Lakes. It was pretty at the top, but you couldn't see very far. We didn't stay there more than a minute or two and we didn't get out of our Jeeps.

On the way out it stopped hailing, and the fog got really thick. In the trees, it was kind of creepy but it was cool.

Coming down Jaws 4 seemed like it was going to be pretty terrifying, but Monica and Don both came down it without any issues.

The other half of the group took the bypass around Jaws 3, then worked their way down Jaws 2 1/2 without any issues. Bill got hung up in Jaws 2 and needed to use his winch to tug himself off of the rocks. They all took the line through Jaws 1 that went along the ridge, and no one had any issues.

They beat the other half of the group off the trail by about three hours. It took us an extra hour to go to the end of the trail and back to Lake Como, but then we spent another two hours on Jaws 3.

There wasn't any traffic other than hikers and people wanting to take the bypass, so we tried and tried on Jaws 3. Monica worked on it for awhile but she just couldn't make it through it, so she backed down to let Don try for awhile.

Don worked on it, trying all different lines. He mangled his street locks on his rear passenger tire pretty good, and he really got some use out of his rock slider. He also came in contact with the rock wall on the right side and scraped both his tub and his door.

After trying for quite awhile he got a little bit of a bounce going and managed to bounce just enough to get over the wall and up the obstacle. It was great to watch!

That also meant that Monica had to try again, and try for that bounce. She did it just the way Don had done it, and found out that the bounce was the key. It didn't take long and she was through it too. That meant that we had both done all of the obstacles, which was our goal.

We worked our way down and didn't have any issues in any of the obstacles. It wasn't long before we were airing up next to the pavement. It wasn't even sunset yet, but we saw the orange glow at the horizon. We got to the restaurant just as the other half of the group was leaving.

It was definitely a wet and slippery trip up Blanca Peak, but it just made it that much more interesting. What a great day! 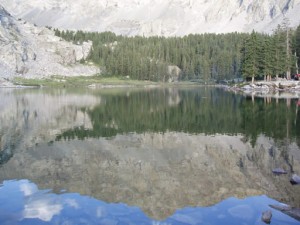