We had become a tight little group as we took at least a month to prepare to run this trail. Robert replaced nearly everything on his Jeep, Monica got lockers, Bob R. got a belly-up skid plate, and Ladd, Eric, Bob R. and Monica all got winches. We were all a little obsessed with Blanca Peak as we met in Alamosa for coffee. We drove to the trailhead and watched the mountain get bigger and bigger in front of us, excited to get on the trail for the first time.

We aired down in the sand, taking off doors and windows and getting ready for the challenging trail. Music was playing but we were all pretty serious. Eric got his Jeep off of his trailer, parked his truck in a long line of trucks and trailers, then we headed up the long, bumpy road of rocks.

A few people commented that the trail was already fun, and we had barely even started the switchbacks. We were about halfway through them when Robert's Jeep started overheating, so we took a little break. We saw the same hikers a few times on the trail when we'd go slower or faster than they were going.

There were some fun rocks to warm up on and the views from the top were amazing, looking down on the valley we just came from. We started back into the trees and the trail straightened out, so we knew we were getting close.

Bob S. led this run because he was the only one on 35" tires. We made sure we had winches and lockers spread out between the group. Soon Bob S. came on the CB and let us know that he had found Jaws 1.

We parked and got out of our Jeeps to go check out the obstacle. It was pretty crazy! There was what appeared to be an easier line on the far left right next to the edge of the trail but it could have been very tippy so we decided to find a line over the big slab of rock.

Bob S. went first, taking the line high up on the right side. He drove right over it, getting a tire in the air and getting pretty tippy but not having any troubles.

Monica went next and kept sliding on the way up, so she tried a few lines before hovering in the middle of the obstacles. She had a new clutch and it was starting to smell as she worked her 3.07 gears trying to get over the obstacle. It was slow going but she made it.

Robert went next and got a high wheelstand on the way up but went right over it. He got tippy enough to get another tire in the air on the way down, but he drove right through it in style.

Eric went next and got extremely tippy with not enough contact between the tires and the sandy rock. His rear end kept sliding around on the way up, throwing his line off. He used his winch to give himself a little tug over the top, then drove through it.

Ladd got a big wheelstand but his tires weren't cooperating and he was having a hard time dragging himself over the rock. He ended up too high centered to keep going, so he used his winch to give himself a little help over it.

Bob R. watched all of this activity and took a line very high up on the right side. It helped him drive through it without getting high centered, but when he came down off the rock he got extremely tippy. He kept going, though, and it all worked out fine.

We all breathed a sigh of relief and our moods had changed from nervous quiet to all smiles. A few people announced that they already had a new favorite trail. This was only the first obstacle but it was probably the most scary one.

We kept going and soon found ourselves looking up at Jaws 2. It was very narrow and a little wet in places, and we were all concerned about slipping off the side. Bob S. found the line, driving high up on a rock on the wall and slipping back down on purpose. It kept him very close to the wall and away from the edge and it worked perfectly.

Monica tried to go up the middle and it didn't work out nearly as well. She ended up sliding off near the edge but then catching on her transfer case skid plate, with rear tires hanging. It was too slick and she was too stuck to keep going. She tried to winch off of Bob S. but kept dragging him down the hill instead, so he had to attach himself to a tree far up the trail. That worked, and Monica got free and through the obstacle.

Robert came through next, sliding off and getting high centered. He took a tug from Monica's winch and got through it without any issues. He took the next bit of rocks in style and went through it with ease.

Eric's line looked perfect as he hugged the wall, but then he got stuck too. He winched toward Robert enough to get his Jeep through the first part, then didn't have any issues.

Ladd's tires were still not working for him so when he went through he was scraping bottom and not getting through. Eric was an anchor and Ladd used his winch to help himself along.

Bob R. tried to follow the line set by Bob S. and it looked good, but then it just wasn't working. He backed down and got dangerously close to the edge. He eased his Jeep down and away from the edge and we all breathed a sigh of relief. He lined himself up again and went high on the rocks, driving right through it without any winching.

The shelf roads were narrow but it didn't seem like much after the Jaws obstacles we had just been through. We got to Jaws 2 1/2 and everyone played a little. Monica got a big wheelstand and Robert didn't, which was a strange reversal.

Jaws 3 was right around the corner and we all lined up below it, not ready to take the bypass. It was a big obstacle and there were a few people on ATVs who came down to watch. We even had a couple other Jeeps take the bypass and get out to watch us in Jaws 3.

Bob S. tackled it first, trying a few different lines to see what felt right. He got his back tire in the hole at the bottom and got a wheelstand out of it, so he thought he'd be better off safe than sorry so he tied a tow strap onto his front corner roll bar so a bunch of guys could hold his front end down. It worked like a charm and he drove right through the wheelstand and up the obstacle. He probably didn't need the strap but it's better to be safe.

Monica was next and she got halfway through the obstacle without any troubles. Once her rear tire got stuck under the ledge and her front tire was up against a big rock it was impossible for her to move. Bob S. attached himself to a tree and Monica tried her winch but she wasn't moving. She backed down a bit and tried another line and managed to winch herself through it.

Robert got up to the base of Jaws 3 and gave it some gas, and it only took him a few seconds to drive right up and through it. He bounced enough and had enough momentum so the ledge didn't trap his tire. He got to the top and received a lot of cheers from the crowd.

At that point everyone else moved to let a buggy go through the obstacle. The driver took it up, then backed down it to take yet another line. This obstacle isn't very challenging for a buggy.

It was starting to get late in the afternoon so the rest of the group took the bypass and we kept going. The rocks right after Jaws 3 are steep and fun, and we had a good time going through them.

When we got to Lake Como there were people all around it, camping and socializing. We talked to a few people, then made our way to the other side of the lake where the trail goes into the trees again.

Bob S. and Robert decided to go find Jaws 4 while we waited. The obstacle wasn't too far into the trees, but it was dry and we didn't think it was tough enough to be Jaws 4. They kept going, looking for Jaws 4 even though they had just driven through it.

The rest of us hiked a bit and hung out while we waited for them to come back. When they did get back, Monica and Eric wanted to go check out the Blue Lakes and the rest of the trail, and Bob S. and Robert wanted to go back. Bob R. and Ladd headed down while the other four Jeeps went up.

Jaws 4 was mellow but steep. You could see how it would be very dangerous and slick if it was muddy. Some people camping at the lake said it was muddy that morning and it was very tough.

The rocks between Jaws 4 and the end were cool and fun to play on. We saw a few marmots on the way to the lake, too.

The waterfall was gorgeous, and we even saw a couple hikers near the top of it. We took some pictures and picked up some broken glass, then headed down.

The way down the trail was much easier, of course. We all dropped down Jaws 3, which was a blast. Everyone slipped in Jaws 2 but then drove out of it. We heard that Ladd needed a tug from a stranger below Jaws 2 after getting very high centered.

We took different lines through Jaws 1 than we did on the way up. We went at it across the middle, getting a little tippy but in the end it worked out better.

The final trip down the bumpy road at the end seemed very long and brutal, but then we were out. We met Ladd and Bob R. at a restaurant and we all congratulated ourselves for conquering Blanca Peak.

It was a great feeling to do this incredible trail! 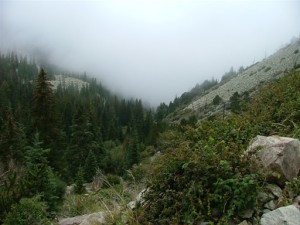