We had just finished Mosquito Pass and we wanted to go check out what used to be the mud pit on Birdseye Gulch. We knew that the mud pit had been reconsctructed but we did not know to what extent. The start of the trail at the top was easy, and the views as we started down the gulch were magnificent. There was a short, bumpy section and some steep descents but otherwise the trail was mellow.

When we got to what was once the mud pit, we were amazed. The road had been reconstructed with culverts and was completely fenced in. The road was dry and would have been dry even if we would have been in a downpour. The pit was there off to the left of the trail, but you could tell that it had not seen any traffic in years.

Right after the old mud pit the trail got very tippy. We crept through that section.

The rocks started soon after that, and they were a nice surprise. Nothing was particularly difficult, though, and it was a narrow descent that included a couple of mild water crossings. This trail would definitely be fun going uphill. Following the creek was very cool, too.

When we came out, the trail went around a piece of private property and ended at the highway. We aired up at a construction site of some sort and headed home.

Birdseye Gulch is an awesome trail. Next time we'll run the trail from Highway 91 so we'll be going uphill so we can have more of a challenge. It was a fun day. 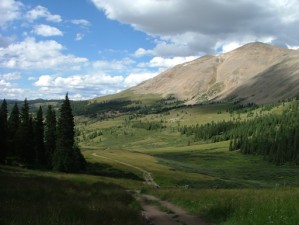 Led by Monica I.
We had just finished Mosquito Pass and we wanted to go check out the mud pit on Birdseye Gulch. If we could get through it we’d do the rest of the trail. If not, we’d head out Mosquito Pass to Leadville. The start of the trail at the top was…
Join Us!
If you aren’t a Member or Subscriber, you can’t see all of the content on this site. Get membership information to see why this site is best when you join and log in