We had just finished Mosquito Pass and we wanted to go check out the mud pit on Birdseye Gulch. If we could get through it we'd do the rest of the trail. If not, we'd head out Mosquito Pass to Leadville.

The start of the trail at the top was easy, and the views as we started down the gulch were very beautiful. We even saw a deer on the mountainside on the way. There was a short, bumpy section but otherwise the trail was mellow.

When we got to the mud pit it looked like it wasn't going to be a big deal, no matter what we'd been hearing about it. It was two sections, and we drove through the first part very easily. We all got out to look at the second part, which looked tougher.

The mud looked like it might be a foot deep at the most, with a slippery hill to climb on the other side. There were trees to winch off of if necessary, so we thought it would be pretty simple to get through it.

As each vehicle tried it, we found out we were completely wrong. The mud was very deep, even when it looked shallow. Though everyone tried their hardest, Bill would be the only one to get through it without winching.

Don tried the mud first, planning on going through the narrowest portion of mud to the steepest hill. The mud was deeper than he thought, and the hill was slicker. He messed around with it for awhile, but then realized he'd have to winch up it. After that, it was messy but easy to get to the other side.

We discussed what we would do. Would we winch everyone through? This was going to take longer than we thought. It didn't take long for everyone to decide that they all wanted a crack at the mud and the rest of the trail.

Dave thought he'd try another part of the mud pit. The section of mud was wider, but the slope on the other side was much easier. He prepared to give it some momentum and he took a running start into the mud.

His front end immediately dropped a couple of feet into the muck, and it started slowly sinking. He was up to his turn signal light in the mud, and it covered his winch. Everyone was in complete shock, laughing along with Dave as the front end of his Jeep sunk. He couldn't get out on his own, and he got winched backwards out of it with help.

He tried Don's line next, but couldn't crawl up it. His bumper kept running into the slope on the other side. He finally had to give it some momentum and dig through the slope a little, but he got up on the slope enough to get winched up. He used Don's winch -- Dave's winch was completely buried in mud.

Mike S. was next, and he went up the same line as Don and Dave. He still managed to bury his front bumper in mud, covering it and his winch. He got a winch pull up from Don.

Michael was next, and he thought he'd hit the same line with more momentum. Instead of cutting through the slope he hit it dead on, with speed. His rear tires came up in the air from the impact. He also managed to knock one of his fog lights off of his bumper.

He backed out and tried again, but had a tough time getting up on the slope. He spun his tires once, throwing mud all over the place. He finally got up enough to be winched up, but his front end was really packed in mud.

Matt thought he'd try a different line. There were some logs in another section of the mud pit, so he tried to cross those. It looked like he might make it up the slope where it wasn't as extreme, but he couldn't quite make it. He needed a winch to help him through.

Todd tried the first line, thinking his longer wheelbase would help. It didn't, and he also got winched through the mud.

Some of the guys started moving the logs to different places, thinking they could make a bridge. It looked like it just might work.

Steve tried the logs in their slightly modified locations, but with the slick mud it looked impossible to stay on the right line. It was close, but in the end he needed to winch.

Brian tried the line across the logs, but his hopes weren't up. Without lockers, it probably wouldn't happen. He made it far enough with momentum to get close enough for winching, though.

Mike C. was next, using the logs he had helped move. He also didn't have lockers, but got close enough. Don's winchline was attached and he pulled him through the last bit.

Bill had been in the mud pit before, but he said it had changed. It probably changes a lot from year to year. He also said that he made it through it under his own power. Everyone was giving him grief, saying he was making the story up. The timing was perfect as Bill crossed the logs and made it to the other side, unassisted. Everyone believes his story, now! He'd be the only one to make it through without winching.

Walt didn't have 4-wheel drive, so he just needed to get through enough to use his winch. He got his Blazer through the mud with enough speed to get his front end close enough.

When he tried to use his winch, Walt found that that also wasn't working. Don winched him through, though his winch wasn't happy about pulling a Blazer through mud that only had 2-wheel drive and no lockers. It all went fine, though.

Ladd was pretty sure he could follow Bill's line through the mud, and he got a good start. However, he forgot to turn on his lockers and when he got to the slope it wasn't happening. He also had to get winched.

We had all made it through the mud! It took us about an hour and a half, but we were victorious. We were looking forward to the rest of the trail.

Right after the mud it got very tippy. Everyone was pretty unhappy about that, but we weren't turning back. We crept through that section.

The rocks started soon after that, and they were a nice surprise. Nothing was particularly difficult, though, and it was all downhill. This section would definitely be fun going uphill.

The railroad tracks would really be a fun trip on a train. We might have to research where they go. Following the creek was very cool, too.

When we came out, we expected to follow the track shown on the topo maps, but it looks like someone owns that property, now. The trail went around that property and ended at the highway.

What an awesome trail! We'll definitely be doing this one again. 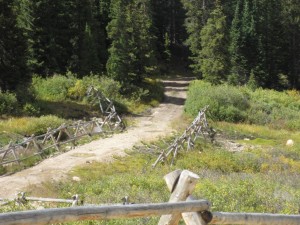 Led by Roger R.
We had just finished Mosquito Pass and we wanted to go check out what used to be the mud pit on Birdseye Gulch. We knew that the mud pit had been reconsctructed but we did not know to what extent. The start of the trail at the top was easy,…
Join Us!
If you aren’t a Member or Subscriber, you can’t see all of the content on this site. Get membership information to see why this site is best when you join and log in