Trail Run on May 28, 2011
Report and photos by Mark U., Trail Leader
View trail information for Billings Canyon

Running Billings Canyon on Memorial Day weekend would be like being stuck in a parking lot, we thought, especially because we were getting a later start than we had planned. On the way up to the normal parking lot where most people leave their trailers we noticed a guy unloading his buggy in a pullout that was big enough for several vehicles, so we joined him. Mark started to air down while Robert unloaded his Jeep. That gave Robert more than enough time harass Mark for not leaving his Jeep on his own trailer.

At around 11AM we finally hit the trailhead, and Mark was giddy as this was his first time playing in Billings Canyon. Robert had been on the trail before but that was with his "old" Jeep, before all of the more recent and major modifications. That meant that Robert was also really looking forward to the day on the trail.

We would stop before each obstacle and both Mark and Robert would walk it first. Then we'd get into our Jeeps and drive it. We did very little spotting. We worked our way through each of the obstacles and it was actually pretty uneventful until we got to Pay 11.

Robert led the way. He pulled up to the Pay 11 waterfall and stopped, hoping for spotting help from Mark. He was checking out Pay 11 when he noticed that Mark was having difficulty getting up the incline right before Pay 11. When he went down to assist he noticed that Mark's passenger front tire was flat. We were disappointed to find that Mark had torn a 3" gash in the sidewall.

With a combination of Robert's bottle jack, Mark's Hi-Lift Jack and a little time they were able to get Mark's spare tire on to replace the destroyed tire. Both Robert and Mark gave it a fighting chance on Pay 11 before each of them pulled out winch lines. Neither of us wanted to push it too hard as we were doing 21 Road the next day.
We did not see or hear another vehicle on the trail the whole day. We were off the trail back at the house, showered, drinking adult beverages and eating barbecue by 6PM.
It was a great day. 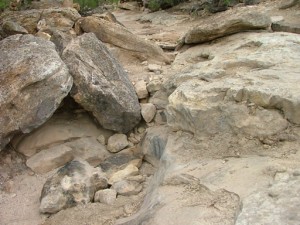 Led by Monica I.
The plan was to walk Billings Canyon and then discuss whether we’d run it or not. We were going to do Bangs Canyon and then head back to town. Naturally, that’s not the way it worked out. Monica had walked the trail in 2006 and wasn’t sure that wheeling it…
Join Us!
If you aren’t a Member or Subscriber, you can’t see all of the content on this site. Get membership information to see why this site is best when you join and log in