Bill Moore Lake was our last trail for the day as well as the 2010 calendar year. So we started up the woopdeedoo hill and up the mountain. The rocky hill had two optional routes. One was like a road and the other was very loose and steep. Matt and Mark went the long way up the road and Gary and Walt went up the loose and steep route.

As we got higher in elevation to more exposed areas, we noticed that the trail started to be covered with more snow. We noticed more snow when we were about halfway up the trail. Mark stopped just before the next hill climb because the trail looked like it was full of snow. With the steep incline and the snow he felt like it would be too much for his stock Jeep. He called it a day and turned around at that point, heading for home.

An ATV was making its way down the hill. The driver stopped and talked to us for a few minutes. He said that we would not make it too far past the hill. Matt, Gary and Walt went up the steep hill to see how far they could go. It took some time to get everyone up the steep hill. We were having fun trying to make our way up.

We kept going until the snow was getting too deep to drive through. We knew that there was a steep downhill part ahead of us not too far off, and we did not think that we would make it down and then back up that steep hill on the way back. So we all thought that it would be a good idea to turn around and go back instead of trying the hill and spending the rest of the day winching in the snow.

So we returned back to the area were Mark had stopped. We thought about trying Mill Creek but decided that we had all the fun we could take for one day. On the way back, Matt went down the loose steep route and the rest went down the easier road. We aired back up when we got to the trailhead. We all had fun day playing in the ice and snow. 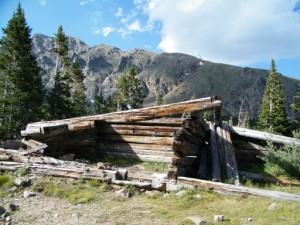