We ran this trail right after running Red Elephant Hill and it was a blast like always. Red Elephant Hill had claimed a few members (Derek S., Robert and Wayne all had to turn around) but we still had a large group for Bill Moore Lake.

We did the flexy hill and everyone parked at the top to wait for Ed to join us again. He had stayed behind to help Robert. It wasn't too long before Ed found us and we continued on the trail.

When we got to the rocky hill we watched a Jeep Wrangler try to make it up the center hill (it looked fairly stock). They gave up and came back down, so the rest of us took on the hill and ended up ahead of the other people. No one had any issues and we all made it to the top (almost everyone took the center hill).

The sun was shining and it wasn't raining or hailing, which was a nice change. We enjoyed the scenery and it wasn't long before we were at the mud pit. This time it was blocked off with a Forest Service sign as well as some large logs, so it looks like the mud pit is permanently closed now. They may have partially filled it in with dirt, because the watery mud was almost all the way to the top. It was a good thing for us, because someone always gives in and runs through it, only to regret it later (see Bob S. on our run from last year).

Everyone posed and played on the rock next to the mud pit. A lot of us tried to go over it with both wheels on the rock but only Austin III was able to get over it. It proved to be too big for 33" tires, so this is a great rock to test your vehicle "before and after" if you're going to 35" tires.

There was a little mud puddle next to the big, blocked-off mud pit. Ed couldn't resist so he splashed some mud around as he flew out of it. They ended up covered in mud but smiling on the way out.

Rod got some nice flex and Daniel managed to get some trail damage as he dented his rocker panel.

We moved on and then we all played on the big rock at the turnaround near the lake. Jed
got some trail damage as he approached the rock and his Hi-Lift jack was bent. Installing it on your front bumper will do that! He removed it and then got up on the rock without any trouble. The jack, however, was pretty bent.

Ed made it the furthest up the rock and it looked like he was just going to drive right over it. Like almost everyone, he got out to check out the scrapes and scratches under his Jeep while he was up there.

Daniel got some more trail damage as he basically ripped the plastic skirt off from under his bumper as it scraped up the rock.

It stayed beautiful, with only a few rain sprinkles for a minute or two. The kids ran around and played at the lake while the adults played on the rock, then we all headed down the trail.

We all took the first section of the "entrance" to the trail on our way out. We did run into one Jeep on our way down but luckily they backed up and let us keep coming down. We aired up at the Bill Moore Lake entrance and then headed home. It was a great run! 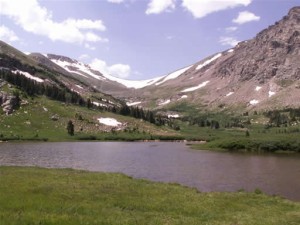