We weren't sure if Benson Cabin would be good enough to be its own trail or just a spur off of Shrine Pass, but we soon found out that it was definitely enough to be a trail on its own. It really was a good time.

We easily found the cabins and trailhead, and we passed through a campsite on our way to the bottom of the hill. It wasn't long before we were bouncing and crawling our way to the top of a rocky and fun climb.

After the rocks ended, the trail was bumpy in places but not too bad. A couple of the switchbacks were washed out and pretty fun.

After the last switchback, we were halfway to the end of the trail with not much further to go. That's when we encountered the first of quite a few snow drifts across the road.

It got easier with each passing vehicle, but it was difficult for everyone. Each person had trouble with at least one snow drift. We had to break out winches and tow straps, but we all made it to the top. Julie had many adventures breaking through the snow, and even cracked her windshield when cold snow hit hot glass baking in the sun.

When we got to the trail's end, we were disappointed. We could see that the trail once continued, and we could see that we weren't far from a ridge and a good view of the scenery around us. The end of the trail, however, is just surrounded by trees.

We had a nice lunch in the shade and then went for a walk along the old trail. We could get a pretty good view of Mount of the Holy Cross and other surrounding mountains, but the views weren't spectacular. That's really what this trail was missing -- good scenery.

The way down was much easier through the broken snow. It didn't take long at all for everyone to get back down to Shrine Pass. We headed out for Red Cliff after a great time exploring around Shrine Pass. 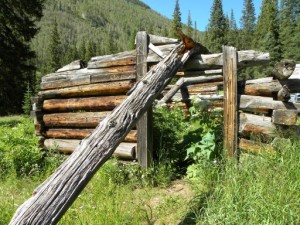 Led by Dave B.
We started the day on Shrine Pass, accidentally driving by the Benson Cabin trail the first time. Then we did Lime Creek and headed back to find Benson Cabin. Heading up the trail, we came to a hill with rocks on it. Dave sent his mountaineering wife ahead with the…
Join Us!
If you aren’t a Member or Subscriber, you can’t see all of the content on this site. Get membership information to see why this site is best when you join and log in