Trail Run on May 22, 2010
Report and photos by Roger R., Trail Leader
View trail information for Behind The Rocks

We were all looking forward to running this trail. It had been awhile, and it was a new trail for quite a few of us. The sun was shining and it promised to be a great day on the trail.

The biggest surprise came right away, immediately after the trailhead sign. A lot of the dirt had eroded away, leaving a lot of chunky rocks from the very start. It ended up being a lot of fun, and we were already four-wheeling by the time we got to Guardian Hill.

We were in for another surprise at that obstacle. We used to have to work at it because there was only a narrow section at the top where you could get through between a natural barrier and a fence. Now the fence was moved over and there was another line up the rock hill. The line was steep but very flat and easy, making this obstacle a breeze. No one had any trouble on it at all.

When we came to the bumpy hill almost everyone had a good time driving down it, then back up it, and then down it again. It was a good test hill for things to come.

We had a mellow time getting to High Dive, and it seemed like it didn't take very long at all. Roger went around that obstacle and then right up Upchuck without a single issue, making it all look very easy.

Robert came down next, and of course he didn't have any issues at all. His tires are too big for him to worry about an obstacle like that. He went right up the Upchuck obstacle, too.

Bob came down High Dive next, and he got some really nice flex on the way down. His line was perfect and he didn't have a single issue. Upchuck was a bit more difficult than it seemed at first, but then he was right up to the top.

Mark came down High Dive following Bob's line and he also got some great flex. It all seemed very easy until he got to Upchuck. He kept falling into the crack where it would stop his progress. Finally, he just gave it more gas and went up the side of it instead of straddling it. It worked out just fine.

Andrew was the last one down High Dive, and he came down it quickly. When he got to the bottom and the last, big drop-off his line was a bit off. He ended up with almost all of his Jeep's weight on one front tire at the very bottom. He bounced a couple of times as everyone yelled for him to give it some gas before he went over. He did just that and drove out of the near emergency.

Andrew tackled Upchuck next and he couldn't seem to get his line right. After a few tries he got his tires on each side of the crack and drove right up it.

We've done Behind The Rocks a few times but no one's ever tried driving up High Dive. Today was our lucky day and Robert was determined to make it to the top. He tried a few lines at the bottom, sticking a tire in the air as high as it would go. He was sure his Jeep would drive out of the stretch so he pushed it, and the gamble worked out. He drove up the big rocks at the bottom and the rest of the way to the top was a breeze. He did a little dance at the top and then came back down victorious.

The weather was perfect except for a growing wind. We stopped at Balcony Arch to take pictures but decided that it would probably be less windy on the other side of the butte so we drove around to the parking area under Picture Frame Arch. It was less windy there so we stopped for lunch.

Lunch was quick and most of us hiked to walk through Picture Frame Arch. The views were definitely worth it, and the walking trail was easy to follow.

After lunch, we headed off to the rest of the fun. Everyone had fun driving up Hummer Hill. It was Mark's first time in Moab and his first time driving up a steep hill of slickrock. He definitely had the best time going up the obstacle.

After driving up High Dive it was a surprise to watch Robert have the only trouble on Hummer Hill. He kept hitting the only bump at the wrong speed, making his big tires bounce on the rock. He tried a few times and finally found the right speed, driving right up the hill.

Roller Coaster was next and it's always a fun time. Everyone drove to the bottom and then back up it, only to drive down it again. Bob and Andrew flexed their suspensions by driving up on one of Robert's tires, and we all enjoyed watching the festivities. But we all wanted to get to the star attraction obstacle.

We came around the corner to face what would be the top of White Knuckle Hill. Even getting there is slow going with some good-sized ledges to drop down. Mark asked if we were on White Knuckle Hill at that point and everyone laughed. When we got to the true obstacle and Mark saw it, he couldn't believe we'd be falling down off of the edge of it.

We've never really had any scares on White Knuckle Hill, but everyone is more comfortable if they have a tow strap attached to their rear bumper with a few guys holding them down, just in case. It would definitely help if there was an emergency.

Mark actually volunteered to go first. He carefully wound his way down to the steep drop off and slowly drove over the edge. He was all smiles as he posed for pictures. What a rush!

Roger came next, and with his longer wheelbase he really made it look easy. His pictures are even more dramatic because his Jeep is bigger. He didn't have any troubles at all.

Bob came down next, looking like he's done the obstacle a million times. We all enjoyed watching his Jeep just fall off of the edge and hit the ground.

Andrew came next while a crowd was starting to form. A couple of vehicles had caught up with us. It was really windy and the wind really picked up as he fell off of the edge. In the process of chasing things in the wind he didn't get as many pictures of him in the obstacle. He really made it look like a piece of cake, though.

Robert came down last, just driving through it. His stretched wheelbase made it pretty easy, and his bigger tires meant less worry about the correct line through the obstacle. Still, everyone has fun falling off of it, no matter how big your rig is.

We stayed for a little while, helping the other group down the hill. Once they were down we went separate ways. Instead of going through Hunters Canyon we went left at the bottom of White Knuckle Hill. That took us out a short road to the obnoxious dirt road that leads us to the pavement. The road on the way out had a few fun, smaller rocks on it but nothing serious.

The best part was that it cut the worst five miles off of the 15-mile road that everyone hates. The road was in good shape and we were making good time with daylight still remaining. Everyone but Roger decided to make a detour to play in some sand near the awful road, almost to the pavement.

Roger aired up and went into town to save a table at a restaurant, but the rest of the group was very late. It turned out that Robert meant to get his front tires in the air after coming off of a sand hill but he gave it a bit too much gas. He ended up airborn for a bit and when he came down he shoved his oil pan up toward his engine, which then made a loud knocking noise. He feared the worst and turned off the Jeep.

After retrieving his Jeep using his truck and trailer the guys did some more inspecting. It seemed to be a smaller issue and not a blown engine like Robert originally thought. That was good news, but it also meant that he was done for the week.

Everyone else made it off of the trail in one piece. It was one of those perfect days on the perfect Moab trail, and everyone was in a great mood. We wrapped up the day with Margaritas in town, and that made it even better. Thanks, Moab! 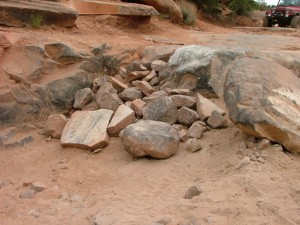