Trail Run on March 25, 2006
Report and photos by Mike S., Trail Leader
View trail information for Behind The Rocks

Finally, after building up to it with some of the best trails in Moab, we were tackling the most difficult trail we would run. With other trail descriptions fresh in our minds, we hit the trailhead by 7:00 AM ready for a challenge. We were not disappointed. In fact, when we got to the first obstacle -- aptly named Guardian Hill -- we finally found an obstacle that was worse than our book had described it. The best line looked to be starting at the left at the bottom and proceeding straight up to the top. This proved to be impossible for either of us -- even the long wheelbase wasn't enough to get up and over the first ledge, as it had been undercut by too much. We then tried it starting on the right side, and this proved to be the best line for both of us, although it got very tippy near the top. The long wheelbase had the advantage here, but not by much.

After collecting ourselves at the top and wondering what the rest of the trail would bring, we headed on. After about 3.5 miles we came to the top of High Dive. We looked it over, and after deciding that it was doable, Mike drove down it following an S-curve through the upper part of the obstacle. The bottom, final drop down to the wash is almost a separate obstacle as you can stop after the first part and review the best line down from there. The bottom part turned out to be almost identical to a big ledge on Metal Masher, where if you keep your tires out of the "V" you can drop down without much pucker factor.

Roger opted to take the bypass, and soon found it wasn't much better than High Dive. He joined Mike at the bottom of Upchuck and they each took their turn going up this obstacle, each making it on the first try with no fanfare or theatrics. After several miles of fairly easy trail, including Roller Coaster ledges, we came to Picture Frame Arch. The area was marked off for reclamation, so we didn't walk up to check the arch out. We proceeded on, thankful for the chance to relax and looking forward to the much-dreaded White Knuckle Hill.

We got to the top of White Knuckle Hill and quickly decided that it deserved its reputation. It looked much worse than in the pictures, and in fact looked to be about two feet more of a drop than in our book. Comparing photos later, it was obvious that there were not as many rocks stacked on the right side as in photos we had seen. Mike went first with a strap on the rear end of his Jeep. With only Roger to act as an anchor, he belayed the strap around a rock to provide some stopping power. It worked so well that Mike had to give it some power to actually go over the edge of the drop! Once over the edge, the Jeep was standing on its nose and the check-engine lights and buzzers came on so there was nothing to do but keep going until on the flats again. What a blast!

Roger was next, and again the long wheelbase had the advantage. Mike held a strap on back, but never needed to put any tension on it as Roger went over the drop off. We were both through with no damage. There was no stopping us now!

We continued to the end of the trail, meeting no one except some runners and dirt bikes, just like most of the trails we had run the previous days. We finally saw a group of well-prepared Jeeps on 35" and 37" tires with V8 engines at the meeting with Pritchett Arch Trail. They had just come up Pritchett Canyon, were planning to run part of Behind the Rocks, and then were off to Upper Helldorado. They were definitely out of our league but I dare say they were not having any more fun than we were.

After running some of the more difficult trails in Moab, all that was left to do was play around on Fins & Things on Sunday morning and then point the Jeeps back to Denver. However, we were already planning our next trip back. Pritchett Canyon next time! 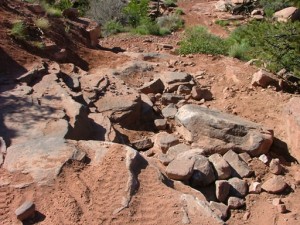 Led by Monica I.
This ended up being a long day filled with obstacle after awesome obstacle. This is now one of our favorite trails. Everyone found their challenges on this trail and we didn’t have to leave anyone behind. Robert came close to losing his Jeep in a ravine but he came out…
Join Us!
If you aren’t a Member or Subscriber, you can’t see all of the content on this site. Get membership information to see why this site is best when you join and log in