Baldwin Lake was our last trail of the day and a new trail for the group. The first part of the trail was a lot like the Mount Antero trail. Then, the Baldwin Lake trail started to get steeper and rockier. Most 4-wheel drive vehicles would not have any issues with the steep and rocky part of the trail, though it could be challenging.

As we went up one of the steeper parts on our way to Baldwin Lake, Mark saw that Terry's right rear shock was broken off of his Jeep. So when we came to a flat spot on the trail we stopped and removed it completely. And soon we were on our way.

Soon we were at a large camping area that was next to Baldwin Creek. The trail had mellowed out a bit. The trail winds its way through some trees and then turns into a short, shelf-like trail with some very nice views of the area. We had no issues for the rest of that section of trail.

Soon we were up by Baldwin Lake and we started to look for a camping spot. We wanted to get the camp set up before it got too dark. We finally found a place and we stopped for a bit.

After getting camp set up for the night, we finished the rest of the Baldwin Lake trail. The upper part of the trail had bigger rocks than the lower part did, and it was just a little bit steeper, too. Still, we only had a good time.

Soon we were at the end of the trail. At the top was an old mine that was still blocked by ice. The old mine building had fallen down and was no longer standing. The area to turn around was a good-sized section of trail and we had no issues turning around.

After walking around for a few minutes, we were on our way back to the camping spot for the night. The moon was almost full. The next morning we cleaned up camp and started our way to the next trail, Iron Chest. 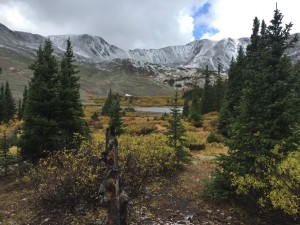 Led by Matt K.
The start of Baldwin Lake trail was just like the very rocky trail of Mount Antero, the trail we just did. But soon, the trail became more challenging and the rocks got bigger. We did not have any issues with the more demanding trail — it just made things more…
Join Us!
If you aren’t a Member or Subscriber, you can’t see all of the content on this site. Get membership information to see why this site is best when you join and log in