Trail Run on May 12, 2011
Report and photos by Monica I., Trail Leader
View trail information for Arths Pasture

We used Arths Pasture to head into the trails around Gemini Bridges and it ended up being a lot more fun than we remembered. How did we forget? The ledges were fun and it was very scenic, out in the middle of nowhere.

It's easy to find the trailhead because it's right next to the tanks. The first part is easy and mellow but it wasn't long before we got to the first rocky section. Everyone had a good time creeping down the bumpy hill under the bright, blue Moab sky.

We all found fun lines through some of the rocky parts but the trail ended too soon. We decided to head over to Mother-in-Law Hill to do some playing.

We set up for lunch at the top of the obstacle and almost everyone found some fun lines through the playground before stopping to eat. Almost everyone went up the leftmost ledge -- some people found it easy while others had a good challenge.

Terry and Austin did the most playing, finding festive lines through the middle of the rocks. Terry used the skinny pedal to get up and over a particularly steep ledge and he was grinning all the way through it. Austin found some great flex on the biggest rocks near the bottom and made the rest look easy.

We had a good lunch, but it was too early to expect any of the big rigs to come off of Metal Masher. We didn't end up having any other people to watch but we still had a great time chatting. We had a long day ahead of us so we didn't hang out for long. Everyone was done playing on Mother-in-Law Hill so we headed off to the next trail. 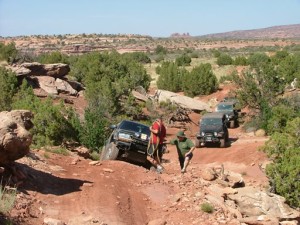 Led by Ladd G.
This was a fun little trail and one we took as a way of exploring a new direction to get out of the system of trails where Metal Masher is. Instead of going out Gemini Bridges Road or out the easy road to Highway 313, we thought we’d see if…
Join Us!
If you aren’t a Member or Subscriber, you can’t see all of the content on this site. Get membership information to see why this site is best when you join and log in