Oddly enough, we had a small group this time on Wheeler Lake. We had been wheeling a lot, and quite a few people took the weekend off to do other things. It turned out to be a soggy day with way too much trail damage, but we still had a great time.

We got to the trailhead pretty quickly and we aired down and got rolling. A group of 10 Land Rovers was at the waterfall ahead of us (Andy was even in the group). They let us go ahead of them.

We passed the mill and we were on Flopper right away. Monica went first, and found her tires spinning in mud at the bottom. The trail was already wetter than usual, and she had to use lockers to get up and over the obstacle.

Gary went next and got the wheelstand we always count on him to get in Flopper. He was on his way over just fine, but then he was spinning so much on the wet rocks that he had to back down and try a new line. The new line he tried almost made him flop right over on his side, and after a few tries at that he gave up and took the bypass.

Bud thought he'd try it further over to the right, but that was just too tippy. He took the bypass too.

Walt couldn't get his tires to stick to the slippery rocks, so he had to try a really tippy line. He tried a lot, but he was too tippy and couldn't get any traction. He gave up and was backing out of it, but his rear differential was really caught on a rock.

The Land Rover group was behind us now, and the first in their group helped Walt out by tugging him back with a tow strap. Too much of his differential was caught, though, and it pulled the big rock up and out of the wet dirt while it was still hung up on Walt's Blazer, lifting both of his rear tires off of the ground.

That wasn't going to work, so a large team from both groups started stacking rocks to get him over the bigger one. They tried a few times, but nothing was working. Finally, they put the tow strap around the rock itself and pulled it slightly back and out of the way so Walt could get out of the obstacle.

Walt had poked a hole in his differential cover, so he got his rear end up on a rock so it would stop leaking. The Land Rover group got by us while Walt and the guys started working on his issue. Some JB Weld and a quick oil change had him running again, and it held firm for the rest of the day. We cleaned up his spills and started up the trail.

It started raining as we left Flopper, and when we got to the V the Land Rovers were just finishing. Monica started up the left side, but it was really slick now. She got sideways in the obstacle and there was no traction, so Gary went around and acted like an anchor so Monica could winch herself up.

Bud came through the middle while Brian tried the far left line. Even that was too slick, and he couldn't even get on it. He had to go around, but he took the V on the way up even though it was really wet. Nice job!

We enjoyed watching the Land Rovers throughout the rest of the trip, watching the clouds weave their way around the mountain peaks. We never saw the top of Mount Lincoln because it was always covered in clouds.

We were putting in doors and windows at the bottom of Bowling Ball Hill when Gary noticed that his steering box was really loose. He used a ratchet strap to secure it to the Jeep, but decided to go back down and play it safe. Walt was already damaged, so he went down too. Bud decided to keep an eye on them, and he headed down too.

Monica and Brian continued up, and Bowling Ball Hill was more difficult than it had been in a few years. A large boulder had rolled to the middle of the trail, and it was challenging getting around it. It was too slick to go over, because if your tire slipped off you would be high centered. With some momentum, we both made it.

The Land Rovers waited for us to get to the top before they started down. We didn't spend much time at the lake because it was pouring rain and you could see your breath. It was weird, considering it had been so hot in Denver. It looked like it could snow at any minute.

We started heading down, and Monica heard a scraping noise. She got out to look, and her front trackbar was hanging down, not attached at the passenger side.

She found a bolt that would work, but the nut was a specialty one because of the limited amount of room. Nothing was going to work. Brian had a great idea and wrapped a thick ratchet strap around the bolt enough to hold it in. We were soaked and cold but we were on our way.

We could talk to Gary on the CB the entire time, and they were already at the reservoir while we were still working on the fix at the lake. We headed down carefully, but the fix held just fine.

The rain finally turned to sprinkles and we aired up and headed out. We took it slow, going no more than 50mph all the way to Bailey for dinner at Sweet Fanny Adams. It was a fun and weird dinner, with a bluegrass band right next to our heads as we ate. It's always a good time there! Even though we were all soaked it was still a good day on the trail. 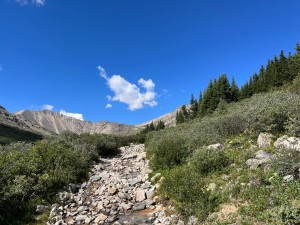