Valley Of The Gods

Trail Run on October 31, 2022
Report and photos by Monica I., Trail Leader
View trail information for Valley Of The Gods

We already had a great three days in southeastern Utah, but no trip to the area near Monument Valley would be complete without a trip through the Valley of the Gods.  On our last day, we headed off to see the spires, bluffs, and other rock structures just up the road from where we were staying.  Monica had turned in her rental Jeep, so she did the trail in her SUV.  Matt had already left for home.

The trail is fairly easy, with the most difficult section at the eastern end at the shallow creek crossing.  No one had any issues with it, and then we were off.

The morning was a little chilly, but the skies were blue.  We stopped at half of the pullouts just to enjoy the weather.  There were RVs camped out at many of the pullouts and down short paths, and it looked like an awesome place to stay.

The trip was nice as we made it to the far end and started heading to see the final sights.  There are fewer of them at that end, but it was still a great trip until we were near the base of the Moki Dugway.  We took a 360-degree video of the trip, so use your mouse or move your cell phone to see the sights.

After Valley of the Gods, we drove the short distance to Goosenecks State Park.  You basically pay to get into a parking lot where you can look down on the river.  It's fairly overpriced, but it's worth it to visit it once.  We actually hung out there for a long while, still enjoying the weather on the last day of October.

We finished the day and a great trip to Utah.  We were already looking forward to next year's adventures. 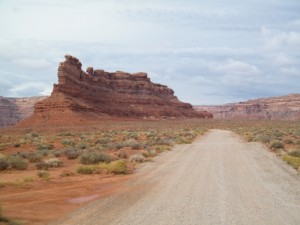 Led by Monica I.
The area was called Valley of the Gods and it had a rough road through it. We had no idea what we’d find, but it had a good name so we thought we’d check it out. We were so surprised by what we found that we already can’t wait to…
Join Us!
If you aren’t a Member or Subscriber, you can’t see all of the content on this site. Get membership information to see why this site is best when you join and log in