We had a long list of trails for the day and we knew we wouldn't get to all of them, but we were going to try to see as much as we could. We started our day early on the Tusher Tunnel trail.

This is one of the trails we call a "gimme" trail because it's short and fairly easy. Though the trail itself isn't too exciting, the tunnel at the end makes the drive worthwhile.

It really didn't take us long to get there, either. We parked at the parking area at the end of the 4x4 trail and headed up to the tunnel. There is a steep but short section along the hike, but otherwise it's easy.

It's dark and cool in the tunnel, and we wondered if anyone ever camped inside it. It was an easy walk to the other side.

The other side was bathed in morning sunshine and it was really beautiful. We hung out for a while there just taking pictures and chatting. It looked like it was going be another gorgeous day.

We soon headed back to the Jeeps and back to the trailhead. We were off to explore the "3D" area and we were really looking forward to it.

Use the arrows or dots to flip through the previews of the other reports for Tusher Tunnel. Click one of them to read more and see all of the photos from that day. 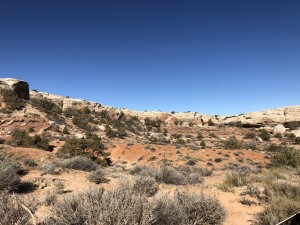 Led by Matt K.
Tusher Tunnel was the first trail of the Moab Spring run for TrailDamage.com. Matt’s transmission went out before the trip and he thought he had plenty of time to get it fixed, but it ended up taking four weeks to get a new one. The dealership paid for a 2018…
Join Us!
If you aren’t a Member or Subscriber, you can’t see all of the content on this site. Get membership information to see why this site is best when you join and log in