We met at the gas station in Johnson Village and the skies were looking a bit menacing. There was snow on the top of Mount Princeton, and it looked like bad weather was coming. The forecast validated that notion, and we prepped for snow. Even though we knew it would be cold, we headed for the high country. We headed down the highway and made our way to St. Elmo.

There was a bit of traffic on the road there, so it was like being in a parade. When we got to St. Elmo it was sprinkling and pretty chilly. We parked on the street to air down and get ready. There were people all over the place even though the weather was less than ideal.

When we started up the trail we ended up having it to ourselves for most of the trip. We saw that some aspen trees had turned yellow while others were still green, so the season was a bit late this year.

We followed Chalk Creek and saw a few people camping, but as we got higher we saw more snow on the ridge to the south of the trail. Then we saw some patches of snow next to the trail. Then it started snowing and it wouldn't stop for almost all of the day.

The closer we got to the pass the more snow was on the trail and falling on us. We climbed up Sawmill Hill, taking things slowly and carefully. When we were almost to the top we saw that the fresh snow was falling on snow from a previous day, and that snow looked like it had been a few inches deep. By the time we got to the pass it was snowing and blowing hard. We got out to check out our first snow of the season, but we didn't stay out of our Jeeps for very long. We soon headed down the other side.

When we got to the intersection with Old Tincup it was pretty obvious that we'd stay on the main trail this time, just to be safe. The main trail was slick and fun in spots, but the rocks kept us on the trail. We passed a group of ATVs on their way up. It was going to be a cold ride for them, but they were all bundled up and ready to go.

When we got to Mirror Lake it was deserted. It was pretty in the winter scenery. We pulled into the Mirror Lake Campground to try to find a place under the trees where it wasn't snowing. We found a place where it was blocked from most of the snow coming down, and we had a quick lunch there. We didn't even break out the chairs. It's no fun sitting in a chair as the snow piles up on your lap. We soon headed out again.

The rest of the trail was easy as we came down out of most of the snow. By the time we got to Tincup it was lightly snowing but only muddy. We had a brief discussion about what to do with the rest of our day, and decided that Tincup Pass would be even worse at this point so going back was not an option. We decided to take Cottonwood Pass on the way home, but first we'd check out some new trails. 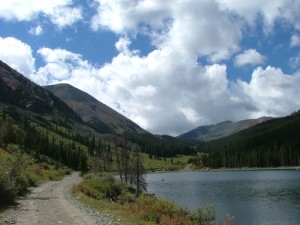 Led by Monica I.
We ran this trail as a connection between our trip to trails in the Crested Butte area and home to Denver. It was a beautiful trail and a great way to get home from Crested Butte. The town of Tincup is very tiny and looks abandoned until you look at…
Join Us!
If you aren’t a Member or Subscriber, you can’t see all of the content on this site. Get membership information to see why this site is best when you join and log in