We ran this trail as a connection between our trip to trails in the Crested Butte area and home to Denver. It was a beautiful trail and a great way to get home from Crested Butte.

The town of Tincup is very tiny and looks abandoned until you look at it more closely. There are people living there. It was Labor Day so there were people everywhere, too.

Mirror Lake is a gorgeous lake and understandably there were lots of people there too. There weren't too many ATVs or dirt bikes -- mostly just people taking in the scenery.

We worked our way up and there was a big rock that you could easily avoid but Monica drove up on it instead. It was a good rock for posing.

A flexy section of rock on the way up to the pass was also fun for everyone on the trail. We took that and ended up at the top with a few other Jeeps. We didn't stay long, and headed down quickly to get ahead of everyone.

The way out was much more mellow than the Tincup side. We were going to stop for lunch but decided to stop in St. Elmo instead. When we got to St. Elmo it turned out to be a true town with nowhere to stop for lunches out of coolers. It was also packed with people out on Labor Day.

We went down the road a bit and had a nice lunch by the stream at a camping area off to the side. Then we headed out to get into the massive stream of traffic headed back to Denver.

It was a great ending to a great Labor Day weekend! 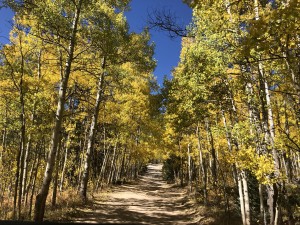 Led by Matt K.
We met up at the gas station in Johnson Village. The fog was lifting after some morning haze and it looked promising. It looked to be a great Indian Summer day with lots of sunshine and blue skies. There was some traffic as we started out near the town of…
Join Us!
If you aren’t a Member or Subscriber, you can’t see all of the content on this site. Get membership information to see why this site is best when you join and log in