We ran this trail as a different way to get home to Denver from Ouray. It was very long and not technical, but it gave us some incredible views of the Rio Grande area from the pass. It was a very nice, well-maintained trail.

We had some difficulties locating the trailhead because route numbers have changed, but we found it eventually. We climbed the mountain with blue skies, though it was chilly.

When we got to the top of the pass it was sunny, but then the sun went behind clouds and it got cold (47 degrees). We were having lunch but ended up finishing up eating in the Jeeps because of the cold wind.

Once we started down the other side we started running into more and more people coming the other direction. The trail became crowded and popular and we most often found ourselves going in the opposite direction compared to most people on the trail.

We did see one small group of offroad vehicles, but the rest were stock SUVs and trucks. The trail was not difficult at all so people were really out enjoying it.

The trail finally leveled out at Pole Creek which wasn't a concern at about 4 inches deep.

When we got to the bottom and into the valley the trail was largely a sandy road that had enough moguls in it to not let us go very quickly (there was too much traffic anyway). We plugged away and after quite awhile we made it out onto a better dirt road.

The Rio Grande Reservoir was very big and very beautiful. It was really in the middle of nowhere, which was cool. There were lots of people fishing as well.

When we got to the highway we split up as Bob went to Lake City and Monica went to Creede. It was a very long trail but the views from the pass were incredible. It made for a nicer trip home, too. 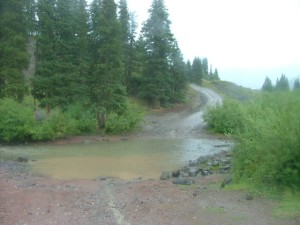 Led by Monica I.
The last time we were here, only Bob R. and Monica did Stony Pass on the way home to Denver. We did it the long way, all the way out to Creede. It was a very, very long trip. We were only going to the intersection with Kite Lake and…
Join Us!
If you aren’t a Member or Subscriber, you can’t see all of the content on this site. Get membership information to see why this site is best when you join and log in