Trail Run on May 30, 2004
Report and photos by Monica I., Trail Leader
View trail information for Spring Creek

It was Memorial Day weekend so we expected a lot of traffic on Spring Creek. We weren't surprised to find ourselves at the bottom of a very long line at the Rock Garden. It was fun to watch everyone tackle the wet and muddy rocks, as always, and we all made it through in one piece. The surprising part was how cold it was and how often it was snowing.

We all met in Downieville and got an extremely late start. It was extremely windy on I-70 and our vehicles are slow enough without all the headwind. Needless to say it took some of us a really long time to get to the Starbucks.

We got on our way and started with the first obstacle. Over the winter two large rocks have moved right into the middle of the line we usually took through this obstacle so it got interesting. Instead of following the right side up to the top you have to weave around a rock at the bottom of the rock slab, then weave around another one at the top.

Monica made it through first without hitting anything. Julie crawled right up to the top next, making it look simple. Kendall came up next and managed to run his Samurai head on into the rock at the top that he ran his Cherokee into the year before.

Matt came through it and got to the middle of it, then kept going straight instead of turning up the hill. He had to back up a bit but managed to get a pretty difficult line to the top. After some spinning in the dirt and rocking back and forth on two tires he also made it through.

Steve worked on the loose boulders for awhile before realizing his Montero wasn't going to cooperate. He also managed to dent in the corner of his bumper. He backed down and went around instead, taking the bypass.

We worked our way through the boulder fields, passing some trucks coming down. When we made it to the next obstacle on the corner it had stopped snowing even though it was still pretty cold. Everyone made it through without any issues.

We took the optional dirt hill that cuts off one of the switchbacks, but Steve managed to work his way sideways on the slippery hill and it got a little dicey. He had his front tires facing downhill and it got pretty tippy. We hooked a tow strap up to the front and held on as he got himself straightened out and backed down. He took the bypass around that one, the whoopdeedoos were just too big and slippery.

We stopped where we usually do and had a nice lunch. Luckily it had stopped snowing while we ate, which was nice! As soon as we started up again it started snowing, so our timing was good.

When we got to the next big obstacle we found yet another new rock in the middle. This one was a huge slab of rock that had come loose from the side. It forced us to pick a different line through it, but it ended up not being a big deal. Steve made a particularly dramatic run through the rocks by getting heavy on the gas pedal all the way through.

We got up to the Rock Garden and found ourselves in line before we even got to the little rocks at the bottom. It was a long line, so we walked to the top to see what was happening. The Rock Garden was very wet and slippery, with standing water in places. It was making it difficult for everyone.

There was a large group of kids in front of us and all of them looked under eighteen years old. All of them were drinking beer and a few of them were visibly drunk. We had been picking up their beer cans off the trail all day (theirs and many others) and here at the Rock Garden it was really bad. They were dropping off beer cans and bottles right in front of the large group (a group that included much younger kids).

Luckily we only had one vehicle behind us and we had been talking with them for a good portion of the trail. When it was our turn a nice guy in front of us with a rock buggy helped spot Steve and stack rocks for him as the rest of us tackled the big stuff.

Monica went through first and actually had the most trouble on a smaller rock before you even get to the bigger ones. Kendall spotted her through and she made it without damaging anything.

Kendall went through next and the Samurai did a great job like it always does. He did get some damage earlier in the trail but made it through the Rock Garden without any problems.

When we got to the last bit of the Rock Garden only Matt and Steve went around the optional mess of rocks. Monica came through after negotiating her line a couple of times, then Kendall ran the Samurai through it making it look easy. Julie took the hard line here and didn't have any troubles at all. She ended up with a deep scrape in her rocker panel skid and it may have been here where that happened.

We started up the last of the rocks, careful not to hit that tree that got Ladd last time. Steve slid into a different tree this time, denting and scraping the side of his Montero and breaking his side view mirror. He had also dented in his rocker panel on another rock earlier so he got a bit of body damage from the trail this time.

We got to the meadow behind some big Jeeps and they went the Georgetown direction while we headed back down to Idaho Springs. We were still missing Matt but the rest of us went to Beau Jo's for pizza (of course!). Even though some of us got some body damage no one had to limp home and we all had a blast. 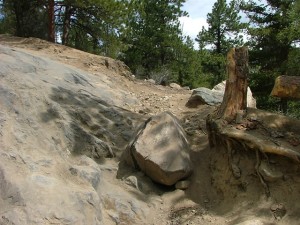