It was already snowing quite a bit when we met at 9AM, so we decided to run the trail backwards to just past the rock garden, then turn around and do it all again. There are a few cliff edges the other way so we probably made a good choice.

We started on the Idaho Springs side and ended up taking a few wrong turns on the way there. We made it to the end of Ute Creek and the meadow just fine, but then we took a right turn and got pretty sidetracked. We doubled back and took the left turn instead. Just remember that you'll travel on two sides of that meadow if you're on the right road!

Once we got to the top we took another wrong turn on an unmarked road. A couple hundred feet down the correct road brought us to the flat area at the top of Spring Creek and we were finally on the trail by about noon.

Mike was high-centered on the first rock in the Rock Garden about 30 seconds into it and spent a lot of the time stuck on rocks or spinning in the snow. Ladd had some troubles with the rocky area at the bottom of the Rock Garden but managed to get through it (it was really messy as he was the last one through). It took everyone a lot of time to get back up.

While we were struggling to make it back to the meadow Ladd slid sideways into a log facing into the trail and broke his side window and part of the fiberglass on the side of his hard top. That makes for a cold ride home in the snow!

Mike had some issues keeping air in one tire, and Brian had a few problems that required a couple trail fixes. Otherwise we slid back out the trail without getting lost again. It was still snowing and I-70 pavement was barely visible in spots all the way home.

We got our one snow run in for the year. This was the last official run of 2003 -- it was a great season! 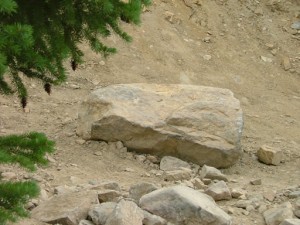