Trail Run on May 14, 2017
Report and photos by Monica I., Trail Leader
View trail information for Spring Canyon Bottom

We had a big loop planned for the day that started on Blue Hills Road and ended on Crystal Geyser.  Spring Canyon Bottom would take us through a good portion of the middle of that loop, so we left Highway 313 and headed in.  The morning was crisp and cool, with no clouds in the sky.

We turned left when we got to Deadman Point, and trail we'd been planning to do for about a decade.  It gave us a nice overlook of where we'd be going on Spring Canyon Bottom.  In fact, we weren't even planning on taking the time to go down to the river but we discussed it and decided to make it a longer day and see it.  It was definitely worth it.

We stopped at the top of the steep and narrow descent for a little while, trying to see the wreckage over the edge.  It's tough to get close enough to the edge, and Matt even jumped down to a small ledge for a better look.  We went through the gate and closed it behind us, and we were lucky to not run into anyone on their way up.

The descent is so steep and so scenic, and we remembered why we liked this trail so much.  As we got lower into the canyon, the temperatures rose.  We needed jackets at the top, and by the time we got to the bottom we were down to t-shirts and shorts.  It was a massive change.

We saw a few people on dirt bikes and ATVs heading into Hey Joe Canyon, but we happily went the other way.  The tamerisk was thick, and we knew it would be a mess in there.  Instead, we headed the other way along the river.  The water was close by as we weaved along next to it.  It was really hot down there, even next to the river.

We got to a spot where the trail went into the water and it leaned Mike way into it on one side before he could climb out.  He told the others to wait, and rushed ahead to find a place to turn around.  He did, and came right back.  That was as far as we needed to go.

We had lunch under the big cottonwood trees near the intersection with Hey Joe Canyon.  It was really windy, but still nice.  Then we headed back up into cooler temperatures without any issues.  Off to the next trail!

Use the arrows or dots to flip through the previews of the other reports for Spring Canyon Bottom. Click one of them to read more and see all of the photos from that day. 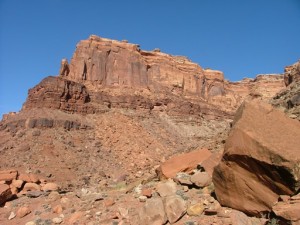 Led by Monica I.
This was the first trail of the Moab trip and we enjoyed a slow start with beautiful views and a blue sky. Though we got pretty turned around in the beginning we eventually found our way to the trail and worked our way down to the end and Hey Joe…
Join Us!
If you aren’t a Member or Subscriber, you can’t see all of the content on this site. Get membership information to see why this site is best when you join and log in