This was the first trail of the day, and we met at a gas station in Woodland Park. We headed out on our way first to Cripple Creek for the Cripple Creek Ice Festival. The theme this year was Renaissance. After walking around for some time, we went down the street out of the small town to start Shelf Road.

The first part of Shelf Road was plowed. The area had a snow storm blow through the day before and the day was still pretty frigid, but the sun was out and it was very beautiful. The snow was not more then a few inches deep.

The fresh snow did make everything look so different, with snow covering everything. The year before was not as white as this year, and we try to see this trail and the ice festival every year.

When we got to the creek crossing and started down the shelf part of the trail, the plow had stopped plowing near that point. There was only a little traffic on that part of the road, and we passed everybody without problems.

We stopped at the parking area for a short break before going through Canon City to Phantom Creek Road. It was a great drive in the snow, and we both had fun and no issues with the snow-covered road. 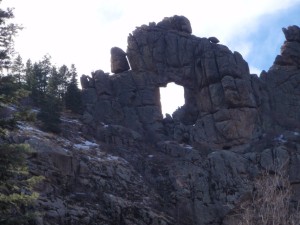